The Corporation - I Want To Get Out Of My Grave 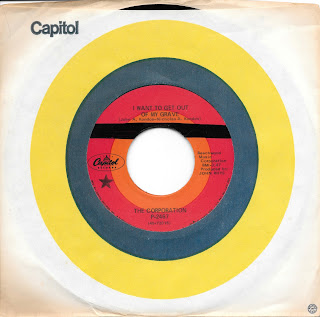 Groovy little uptempo garage/pop/psych nugget with nice fuzzy guitars and a smattering of heavy organ throughout.

Formed in Milwaukee in 1968 at Cudahy's Galaxy Club where the Kondos brothers joined up with members of an outfit called Eastern Mean Time. Some months later they were heard by Capitol reps at another club The Bastille, which the band had bought into.

With a contract for an album the band journeyed to Detroit to record at Terra Shirma studios with producer John Rhys. Released in February 1969, the LP is notable for the side-long psychedelic rework of John Coltrane's India. All tracks on side one were group compositions. It was successful in several regions (No. 3 in Milwaukee) but only rose to No. 197 in the national charts.

The group made more recordings but a deal for a second Capitol album fell through and this material was eventually spread across two LPs released by the band on Age Of Aquarius, a Cuca custom label (Fuzz, Acid & Flowers).

The Corporation - I Want To Get Out Of My Grave