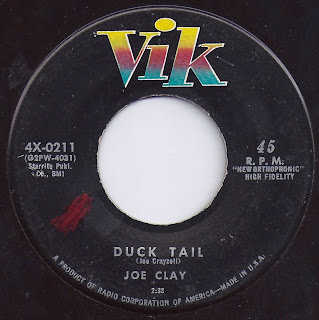 Rockabilly from 1956 from Joe Clay on the Vik label.

Joe Clay (b. Claiborne Joseph Cheramie, 1939) is an American rockabilly musician from Gretna, Louisiana.
Clay first began performing at age 12 in a country band, who were offered a spot performing on local radio station WWEZ. RCA subsidiary Vik Records signed him a few years later, while he was still in his teens; he recorded in New York with guitarists Mickey Baker and Skeeter Best, bassist Leonard Gaskin, and drummers Bobby Donaldson and Joe Marshall. In 1956, he appeared on The Ed Sullivan Show, a few months before Elvis Presley played there, and played a cover of The Platters' hit "Only You". Clay would later play guitar on some of Elvis's recordings, but his manager would not let him tour outside the New Orleans area, and he never scored a hit.
After being dropped from RCA, he continued performing in New Orleans for over 30 years. In the 1980s, the rockabilly revival in Europe resulted in renewed interest in Clay; he then toured England in 1986.
Further info about Joe Clay is from source LP 'Ducktail' in 1986; Bear Family Records BFX 15224 (made in West Germany).
Drove a school bus for 15 yrs. in the New Orleans area (reported on the back LP cover in 1986 from Bear Records)
LP back cover "During 1955 his local reputation enabled him to play the prestigious Louisiana Hayride out of Shreveport where he shared billing with the newly emerging Elvis Presley." It also mentions he even filled in as a drummer for Elvis when he played Pontchartrain Amusement Park in New Orleans and D.J. Fontana could not make the gig.
Joe Clay's parents encouraged an early interest in country music and at the age of 12, he was already a competent drummer, later also learning rhythm guitar & electric bass.
The LP "Ducktail" back cover article was written by Ian Wallis, June 1986.
In 2008, Joe Clay appeared in an award-winning Canadian documentary entitled Rockabilly 514 directed by Patricia Chica and Mike Wafer. He speaks about his early beginnings as a rockabilly musician in the 1950s and his fascination for the new generation of rockabilly kids. He's also seen performing live his single Sixteen Chicks among an enthusiastic crowd of young rockabilly fans.

Joe Clay - Sixteen Chicks
Posted by Devil Dick at 9:14 AM

Thanks! One in my Top Ten rockabilly favorites!