Dewey Martin and Medicine Ball - There Must Be A Reason 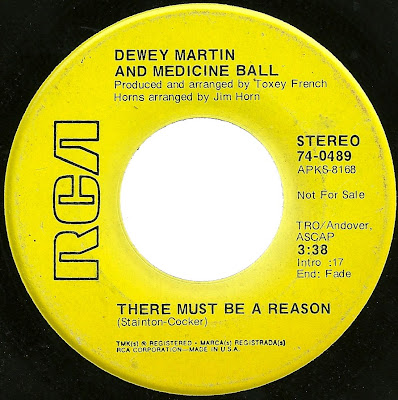 I'll be honest. when i bought this 45 i had no idea who Dewey Martin was. I mean, I'm old but not old enough to remember who the drummer from Buffalo Springfield was. (Sorry Dewey)

This is a rocking little number with some gritty vox & lots of piano & horns. but don't let the piano & horns scare you away becuase there is some cool guitar wankery to save the day!!!

So anyway, this cat went from rock legend to car mechanic...

what i also love about this 45 is that it was produced by "Toxey French" with horns arranged by Jim "Horn"....

The below is all lifted from Dewy's Wiki....

Martin became the last member to join the legendary group at its founding. Along with Stephen Stills and Richie Furay, he was one of only three musicians to stay with the group from its inception in April 1966 to its disbandment on May 5, 1968. During his time with the group, Martin also did session work for The Monkees.
In concert, he sang covers of Wilson Pickett's In The Midnight Hour and Richie Furay's "Nobody's Fool" and "Good Time Boy". The latter appeared on the band's second album, Buffalo Springfield Again. He also sang Neil Young's "Mr Soul" as the introduction to Young's "Broken Arrow" on the same album and backing vocals on the band's biggest hit, "For What It's Worth".

When the original band broke up Martin formed a new version in September 1968. Dubbed "New Buffalo Springfield", the line up comprised guitarists Dave Price (Davy Jones' stand-in in The Monkees) and Gary Rowles (son of jazz pianist Jimmy Rowles); bass player Bob Apperson; drummer Don Poncher; and horn player Jim Price, who later became a top session musician for The Rolling Stones and Joe Cocker among others.
The new band toured extensively and appeared at the highly publicised "Holiday Rock Festival" in San Francisco on December 25–26 but soon fell foul of Stephen Stills and Neil Young who took legal action to prevent Martin from using the band's name.
In February 1969, Martin and Dave Price formed a second version of New Buffalo Springfield with guitarist Bob "BJ" Jones and bass player Randy Fuller, brother of Bobby Fuller. The band did some tentative recordings with producer Tom Dowd overseeing but they were scrapped.
The second line up was expanded with another guitarist Joey Newman in June 1969 but two months later, Martin was fired and the remaining members carried on as Blue Mountain Eagle.

In September 1969, Martin signed a solo deal with Uni Records and recorded a cover of the country favourite, "Jambalaya" with session ace James Burton on guitar. It was released as a single with Martin's own composition "Ala-Bam" on the b-side.
He then briefly worked on some new material with guitarist John Noreen from the folk-rock group, Rose Garden but by December the pair had split.
Martin next put together a new group called Medicine Ball, which featured mainstays, guitarist Billy Darnell and pianist Pete Bradstreet, who later recorded with the band Electric Range. The band also featured at various times, guitarists Bob Stamps and Randy Fuller, and bass players Terry Gregg, Harvey Kagan and Steve Lefever. An album, "Dewey Martin's Medicine Ball", was released in August 1970 and featured steel guitarist Buddy Emmons and former Buffalo Springfield bass player Bruce Palmer.
In late 1970, Martin and Darnell formed a new version of Medicine Ball with pianist Charles Lamont and bass player Tom Leavey and made some tentative recordings which were subsequently scrapped.
Martin then recorded five tracks with Elvis Presley's band for RCA. Two of the songs – a cover of Alan O'Day's "Caress Me Pretty Music" and a cover of Joe Cocker and Chris Stainton's "There Must Be A Reason" were put out as a single in early 1971. After producing an album for Truk in 1971, Martin retired from the music industry to become a car mechanic.

Dewey Martin and Medicine Ball - There Must Be A Reason
Posted by Devil Dick at 4:51 AM

Do you really not know Jim Horn ?
He played with Duane Eddy, the Beatles , the Beach Boys. He is still at it.

i just found it funny that Jim Horn arranged the Horns...

cool that he is still at it!!!