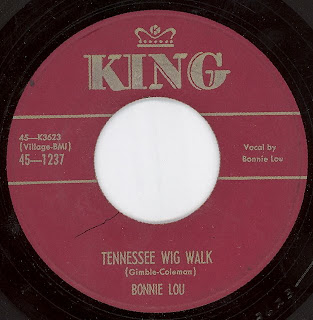 Going to stick with the King label here and some more early country rockin' style, this time from 1953.

Bonnie Lou (born Mary Jo Kath October 27, 1924, Talawanda, Indiana) is an American Rock and Roll and Country Music singer. During the mid 1950s, rock and roll was the hottest selling music on the market. Few women however ventured into this territory, like Bonnie Lou. Bonnie Lou was one of the first female Rock & Roll stars who proved to the public that female singers could indeed sing rock and roll.

Bonnie Lou's real name is Mary Jo Kath, and she was born in 1924 in Illinois. Mary grew up listening to Patsy Montana and her band "The Prairie Ramblers", and was greatly inspired by her. Mary learned how to yodel, which was from the help of her Swiss grandmother. As a child she learned how to play two instruments, the violin and guitar. By the young age of 16, she was singing and performing on a local radio show in Bloomington, Illinois. By age 18, Mary went on a bigger radio show, which aired in Kansas City, Missouri. Her exposure on this radio show in Kansas City, helped her land a job as a singer on WLW Radio in Cincinnati, Ohio, where station executive Bill McCluskey hired Mary as a singer a yodeler for his radio show called Midwestern Hayride Country & Western Radio Program. McCluskey was the one who gave Mary Jo the stage name she would be known by for the rest of her life, "Bonnie Lou". While on the radio show in Cincinnati, Lou performed regularly with Country Music girl group the Girls of the Golden West, which Lou listened to as a child.

In 1953, Lou signed on with her first record company called King Records in Cincinnati, Ohio. In the beginning stages of her recording career, Lou recorded Country Music material and released it. Bonnie soon had big Country Music hits with "Tennessee Wig Walk" and "Seven Lonely Days". Both songs were Top 10 Country hits. The flip side of her hit "Seven Lonely Days" featured the song "Just Out of Reach", which would later be covered by other Country singers, like Patsy Cline, Billie Jo Spears, Jean Shepard, and k.d. Lang.

Soon, Bonnie started recording Rockabilly or Rock & Roll. In 1954, she recorded the song "Two-Step Side-Step", which was written by Murry Wilson, who is the father of The Beach Boys, Carl, Brian, and Dennis. In 1955, she released her first Rock & Roll record called "Daddy-O". The song was a Top 15 Pop hit that year, and turned Lou into a major Rock & Roll star overnight. The song was later covered by The Fontaine Sisters on the Dot Records label. It wasn't until 1958 though that Bonnie had another hit, this a duet with Rusty York called "La Dee Dah". They soon recorded a Teen Pop song together called "I Let the School Bell Ding-a-Ling". Soon, Lou left the King label for another Cincinnati record label called Fraternity. She released several different singles for Fraternity, one of which were as successful as her singles for the King label.

The Bonnie Lou hit was the most unusual record to chart in the U K at a time when country music meant no more than Slim Whitman and Tennessee Ernie Ford.
It beat all the covers for one thing and Bonnie Lou-who was also known as Sally Carson-never appeared in this country unlike Whitman-whose country music was heavily watered down anyway.

Ooh this is a good one, DD! You know I love any song about wigs, natch.