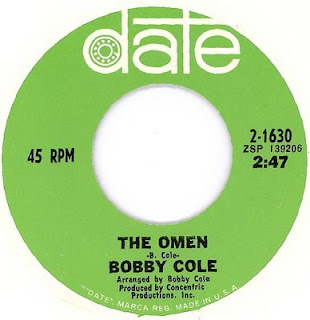 Originally posted 9/5/08, I've added the flip "Holly" because i've had a few folks ask for it. (Sorry no label scan now but I'll get one up at work next week)

If you didn't catch this the 1st time around here you go!

Here is another odd one:
From one time Jazz cat and lover of Judy garland.

Here’s part of the story:

BOBBY's first album “New New New” was issued in mono and stereo by Columbia.
Not all that different from what other jazz trios were doing, about the only thing NEW NEW NEW was Bobby himself...his youthful voice already having a smokey burr to it. I thought he was effective on "Ebb Tide," "I sound like I have a sock in my mouth!" he said.
There are some "tasty" arrangements (as they used to say) and one trademark tune is "The Lady's In Love With You." This would be one of Bobby's piano-pounding up-tempo trademarks on the bistro circuit. I'm sure he sang it to many a ringsider couple...the guy feeling proud, and the girl...staring and dreaming about Bobby.
Bobby could've gotten a deal with Capitol through his pal Sinatra...but Bobby didn't want to be doing what Frank and Dino were doing. Or do what he did on the Columbia album. It was do it his way, or not at all
So it was not at all

In 1963 Bobby and Judy Garland became an item, and Bobby became the conductor and arranger (replacing Mel Torme) as "The Judy Garland Show" sputtered toward the end of its run .

Here's where it gets a bit more interesting:

One night in Greenwich Village, Bobby saw Jerry Jeff Walker strumming a little tune called "Mr. Bojangles." It wasn't much...but Bobby saw its potential. Seized with new energy and purpose, he worked all his magic in trying to get backing for a single. He was so worked up over the arrangements and what he would need, he barely even considered the B-side
"Mister Bojangles" (released on Columbia's subsidiary Date Records) was a little masterpiece, something George ("For the Benefit of Mr. Kite") Martin would've been proud of. With its sorrowful violin and sweet calliope, the orchestration set the tone for an elegy to an old vaudevillian, and Bobby's world-weary vocal made the sentiment truly ache
The big surprise was the B-Side, a folk-rock original called "Bus 22 to Bethlehem." Excellent lyrics here on the commercialization of religion. Bobby just tossed it off with some guitars and a beat...but it was a very worthy companion to "Mister Bojangles."
Unfortunately for Bobby, Atco signed Walker and Jerry Jeff's country version fought a regional war with Bobby's production. Depending on where Columbia and Atlantic had better coverage and strength, radio stations played one version or the other, and the two versions hovered around bottom of the Top 40 without either breaking through.
But it was Bobby's version that led to ballad-jazz versions from Sammy Davis Jr. , George Burns and others. Walker's version yielded another twangy try via the Nitty Gritty Dirt Band.
Bobby was asked if that was his only single. And he said yes
But actually, a second single appeared on the Date label. Bobby may have been correct that it was pressed in white label demo versions but not really "released" in a meaningful quantity. So it wasn't really an official second "single." Or, he may simply have not thought much about "The Omen," a kind of heavy "message" effort with heavy, symbolic lyrics (very fitting for the time).

So that being said: here’s the date single….