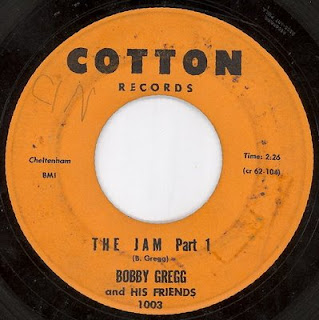 Took Part 1 and Part 2 of Bobby Gregg's The Jam and mixed them down into 1 rocking track for you!!!

Robert J. (Bobby) Gregg (born 1929 or 1930 in Philadelphia, Pennsylvania) is a musician who has performed as a drummer and has also been a record producer. As a drum soloist and band leader he recorded one album and several singles, including one Top 40 single in the United States. But he is better known for his work as a drummer on several seminal 1960s songs, including Bob Dylan's "Like a Rolling Stone" and Simon and Garfunkel's "The Sound of Silence". He was also temporarily a member of The Hawks, which later became known as The Band.


Early career
Gregg first attracted attention by 1955 as the only white member of the otherwise all-black group Steve Gibson and the Red Caps. By 1962, he fronted Bobby Gregg and His Friends for a single, "The Jam - Part 1", which reached #14 on the Billboard R&B chart and #29 on the Billboard Hot 100 chart. The B-side of the single was "The Jam - Part 2". In 1963, he put out an album, released on Epic Records, called Let's Stomp and Wild Weekend. In 1964 and 1965, he released the singles "Any Number Can Win", "MacDougal Street", "It's Good to Me" and "Charly Ba-Ba". He also acted as a record producer at this time, producing songs by Sun Ra, Erma Franklin, Richard Wylie and Frank Hunter. He sometimes played the drums on the records he produced

Tid Bit #1: According to The Hound Roy Buchanan plays the git on this track....

Hey,
This is one of my all time favorite records!
I have several copies, as the label changed slightly.
The original single track was released on CD some years back on Guitar Players'
"Legends of Guitar" series on the volume
"Rock the 60's". This track was then cut in two for the single. Thanks for your fine post!

Hi,I have a copy but mine is white not orange ,Roy apparently made a remark which is in The sound of Philadelphia by Tony cummings that they were definetly not friends and he was supposed to be credited on the single he also cut Potato peeler another classic .My favourite Buchanan period would have loved to seen him live in those days.great post always something of interest on your blog .regards brujo

Nice site, I have 2 records by Bobby Gregg Walk On Epic 9579 and Let's Jam Again as Bobby Gregg and firends Epic 9541 I think Roy Buchanan played on these as well?

hmmmmmm.... I met Bobby Gregg once back in 1981, He was doing a rehearsal with he Drifters. Where is he today?

Bobby Gregg dated my Mom and lived with us in Ridgewood, NJ until the late 70's. I have tried to locate him but have had no luck. Has anyone seen him or know if he's still around?

Sorry S. I can't help you. Cool to know that he lived in NJ though. Further proof that NJ does in FACT rule!
Cheers!
dd