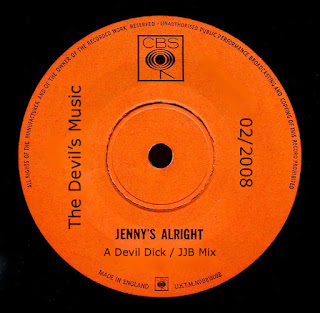 Hi DD, i was wondering if you might be able to help me with something. I've been re-re-re-discovering the joys of early Atomic Rooster again recently & discovered that their debut LP was different on it's US release to the UK/Euro version as they had the recently arrived John DuCann overdub guitar on the whole record. As the UK release is guitar-free & John was a rather talented 6 stringer i'm keen to hear it, but it doesn't seem like that version ever made it to CD, or if it did it's not been made apparent on the packaging or in info i've read online. It occured to me that this might be an item you have nestling in your impressive collection & if so a rip would be very much appreciated by yours truly. All the best, BFK

BFK, are you talking about death walks behind you? If so i do have an american pressing. Let me dig it out and rip it for you.
Cheers!
DD

BFK as far as i know the Self Titled records was not released in the US back then..... DD

Sorry for the delay in getting back to you DD. I'm afraid i got things somewhat confused due in part to the misinformation spread by the 'net & partly by my own poor memory. It was the debut LP 'Atomic Roooster' which i was referring to, but it transpires that the most recent CD version does include both the original mixes & the Du-Cann overdubbed tracks, so i'll treat myself to that as a birthday present. Thanks for your attempt to assist & for uploading 'Death...'. I'd never seen that cover art before, only the William Blake art from the UK version, this alternate version is very cool & it would look great as a t-shirt design. Sorry for any confusion & thanks again. I hope you agree that time spent on Atomic Rooster is never wasted. ;) Best wishes, BFK

No worries BFK! You are correct any time spent with AR is time well spent!
Cheers!
DD