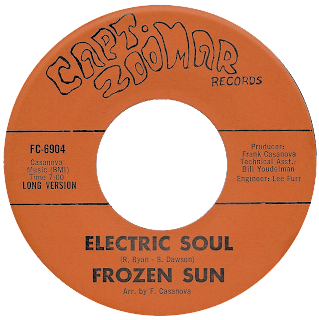 I've been in contact with the producer of this rare Hendrix inspired 45. See below:

I am the Producer of the recording. These few records left are from my personal collection. May be only a couple dozen left in the world... and you have one! I was a "star" top-40 DJ back in the late 1960s. I produce many concerts and "Battle of the Bands" events in Tucson, Arizona. I met rhythm guitarist/singer Sid Dawson at the Univ.of Arizona. I then featured the Frozen Sun in a number of these concerts. They began to have a following, so I then produced their records. Lead guitar / Singer Ron Ryan was an amazing Jimi Hendrix style player... drummer Lee Balin and bass player Hector Carrillo. The first record was "Got To Get Away", followed by this record "Electric Soul", which climbed to the top ten in southern Arizona in 1969.
Best... Frank Casanova


PS: Just found this article on the web:

"Well have you been electrically stoned, you know living in the danger zone ..."

KTKT' DJ Frank Casanova was a local icon in the late '60s, hosting his regular slot as well as his late night "Threshold" show, also on KTKT, which featured the heavier "underground/acid rock" sounds of the day. Frank also managed bands, produced live events, and started a record label; Capt. Zoomar Records, named after a character on the legendary Phoenix TV program The Wallace and Ladmo Show. Frank's label released three records, two by Frozen Sun and one by KTKT's Johnny Rabbit (Lee Poole) who did his show in an impressive Wolfman Jack voice, during the time the Wolfman was at the Tijuana/Hollywood powerhouse, XERB. "Electric Soul" is the second Frozen Sun release on the label, released in '69, pairing an edited and long version of the Hendrix inspired track; the long version including an extended guitar workout and a drum solo. Lee Furr, the founder of his own well-known local studio a few years later, recorded this track at Arizona Recorders with Frank Casanova as the producer. Band members were rhythm guitarist Sid Dawson, lead guitarist (with big Hendrix hair) Ron Ryan, bassist Hector Carrillo and drummer Lee Balin. For an in-depth look at Frank Casanova's days in Tucson radio, check out CJ Brown's in-depth interview with Frank on the ktkt.homestead.com website. "Electric Soul" is a killer track, have a listen on YouTube as you most likely will not find one of these records floating around!

Lee Joseph grew up in Tucson. He's a DJ (Luxuriamusic.com), marketer of cool shit (Reverberations Media) and founder/CEO of internationally respected Dionysus Records, an indie that has long specialized in releasing super-rare music, and more. He came of age in the first wave of Tucson punk rock and is an expert on Tucson music. He now lives in California. Vintage Vinyl is a, recurring addition to the Tucson Weekly.

Labels: FTW, Hendrix, Matters, Rare, White Wine Sucks But It's All I Have

Good to see you "coming back!" Understand about having rough times to get through too. Still sharing quite obscure material & thanx for all/any info. you can provide. Songs are ALL "new hears" here.