The Third Rail - The Shape Of Things To Come 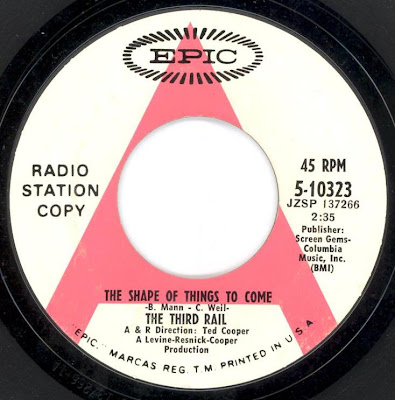 "Shape of Things to Come" is a song written by Barry Mann and Cynthia Weil, most famously performed by Max Frost and the Troopers on their 1968 album Shape of Things to Come. The song was also released without vocals by Davie Allan and the Arrows. The song was a mere 1 minute 55 seconds in length.
Others who have performed the song include Slade, Vacuum, Aorta, Third Rail, Paul Revere and the Raiders, The Pointed Sticks, The Ramones, the Fuzztones, The Urinals, The Diodes, Mod Fun and Marshmallow Overcoat. More recently, the song has been released by Toxic Reasons and Janelle Monáe.

The Third Rail was an American pop/rock group made up of studio musicians briefly popular in the 1960s.
The group had three members: Arthur Resnick, Kris Resnick (Artie's wife), and Joey Levine. Artie had spent years writing Brill Building pop sings, including "Under the Boardwalk" by The Drifters and "Good Lovin' by The Rascals. Levine had played in local bands in New York City and was still in his teens when the group first recorded together. They only did one live show together, in Cincinnati, though they recorded several singles and a full-length album. In 1967, their single "Run Run Run" reached #53 on the Billboard Hot 100, and that same year the LP Id Music was released on Epic Records.
The last single released under the name Third Rail was issued in 1968, after which Levine went on to sing the tune "Yummy Yummy Yummy" for the Ohio Express. All three members later went on to work as songwriters for Kasenetz & Katz.

The Third Rail - The Shape Of Things To Come
Posted by Devil Dick at 4:55 AM

This is a great take on a great tune... I enjoyed the little history lesson too.
I also have an instrumental version of this one by a 90s Estrus records outfit called The Satan's Pilgrims.

Thank you! And now I have yet another goofy project to keep me occupied (tracking down the other versions):-)

Max Frost was the name of the main character in the classic AIP movie Wild in the Streets" and "Shape..." appears in it too. The film is worth seeing if you like exloitation sixties style (who doesn't?) and it does contain some other good tracks too!