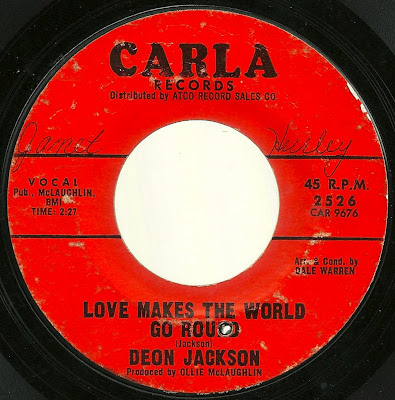 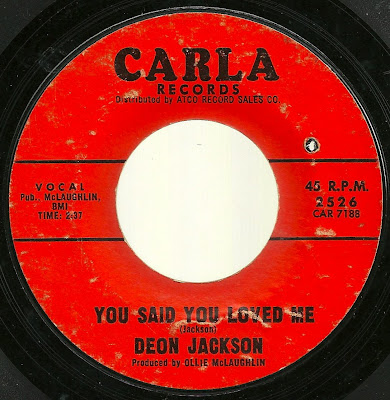 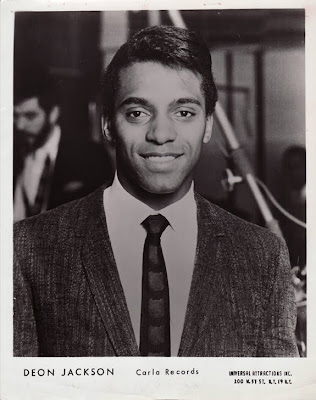 I picked this up recently @ a 3 for 1 dollar sale. Good stuff. Janet Hurley had good taste...

Deon Jackson (born January 26, 1946), is an American soul singer and songwriter.
Jackson was born at Ann Arbor, Michigan. He performed in vocal groups and as a soloist in high school, he attended Ann Arbor High School and was signed while still in school by producer Ollie McLaughlin. His first single was his own "You Said You Love Me", followed by "Come Back Home"; both were regional hits in Michigan. Jackson toured heavily on the local club circuit before releasing his next record, 1965's "Love Makes the World Go Round" on Carla Records. The tune became a major pop hit, and a full-length album was released subsequently on Atco Records. Though he is often referred to as a one hit wonder, Jackson had two more successful singles, and recorded until the end of the decade, but after this faded from view, he performed mostly in the Chicago area. Jackson now works as a Student Supervisor at Wheaton Warrenville South High School in Wheaton, Illinois

Deon Jackson - You Said You Loved Me
Posted by Devil Dick at 3:32 PM

Born in 1946 and in bands in high school in Ann Arbor Michigan. That rang a bell. I checked the dates. He went to high school with Iggy Pop. Small world.

wow jon, that is amazing!!!