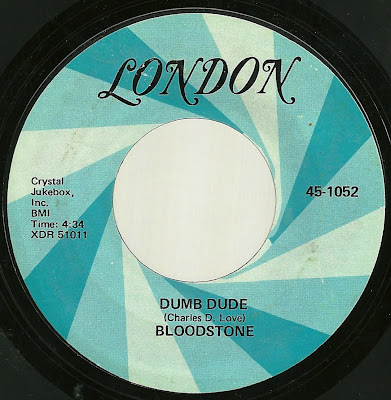 I'm not much for slow soul stuff, i usually like my soul upbeat and funky but this is a pretty dope jam

Bloodstone was former American R&B, soul, and funk group, most popular in the 1970s and early 1980s.

Formed in 1962, in Kansas City, Missouri, the group was a high school doo-wop group, The Sinceres. The band consisted of Melvin Webb on drums, Roger Durham on percussion, Charles Love on guitar and vocals, Charles McCormack on bass, Harry Williams on percussion, and Willis Draffen on guitar. Later they renamed themselves Bloodstone, and after learning to play their respective musical instruments, moved to Los Angeles, California.

Bloodstone - Dumb Dude
Posted by Devil Dick at 8:21 AM