Cher - Needles and Pins - Bang Bang (My Baby Shot Me Down) 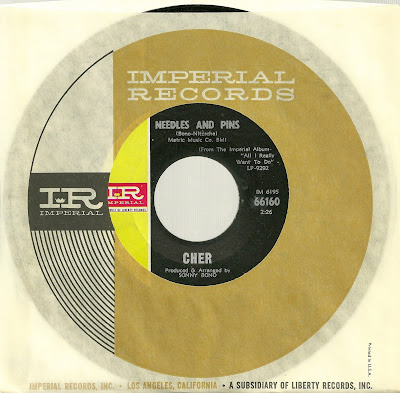 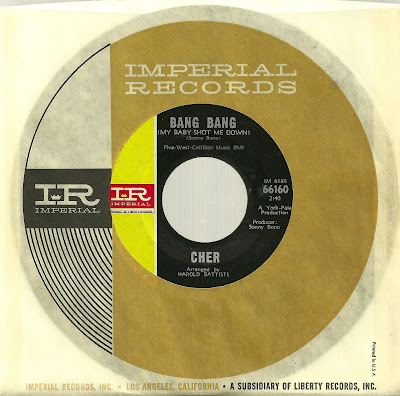 I'm posting this up for a couple of reasons. First on my previous post by Wynona Carr i had not realized that both tracks were penned by none other than Sonny Bono, who had his hand in both of these tracks as well.

Also while i can honestly say that as a kid i did watch the Sonny & Cher show i am not a huge fan. I did have a thing for Cher as a kid though. So that leads me to my next reason for posting. the funny thing about this 45 is that have actually heard cover songs of this before i ever heard these originals. i first heard the Ramones doing needles and pins way back when and i also heard Terry Reid's version of Bang Bang long before i heard this 45. No big deal. i just ran across this while digging in some of my stuff and just thought it would be cool to put it up because of my recent failure to give Mr. Bono proper credit. I guess he was a pretty good song writter but just not a good skier... RIP Mr. Bono.

As for the Ramones, well they are the Ramones! and i guess Terry Reid is most famous for NOT taking the lead singer job of Jimmy Page's New Yardbirds. The new Yardbirds soon after became Led Zeppelin.

How's that for shoulda, coulda, didn't... The rest is as they say HISTORY...

I think that idiotic TV show obscured Sonny's contributions as a songwriter, and a producer who learned very well from his mentor, Phil Spector. Hey, how many people had their songs covered by Cher, the Ramones, Frank Sintara, the Rolling Stones, and The Bonzo Dog Band?

Just read your piece of a few days ago about buying records for the sheer pleasure. Great stuff. I buy cds. mainly, and do a few downloads. I like your postings. Keep up the good work. By the way, have you heard Dolly Cooper's track My Man? If you haven't, I really think you'll like it. All the best.

This appears to be the first pressing of this single, because it was also issued with the same issue number (66160) with the b-side of "Our Day Will Come".

nope terry reid is mostly known for ...being good and thanks

don't get me wrong anonymous, i LOVE Terry and his voice. I'd actually say better than good...