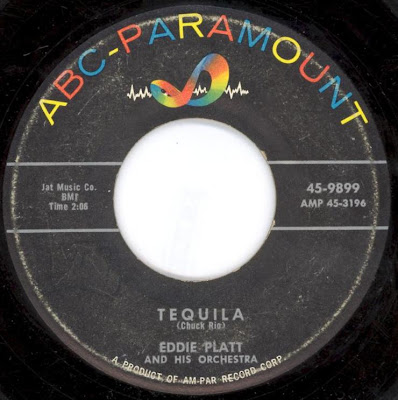 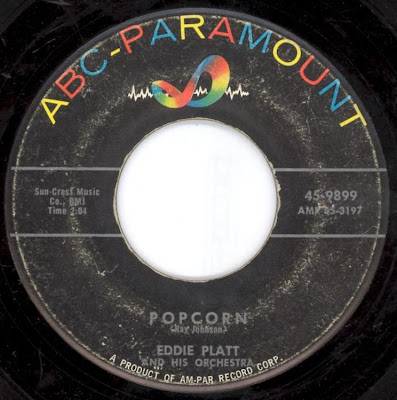 This shit is kind of hokey but it has a certain charm. A wacky cover of the Champs Tequilla and a goofy high energy Popcorn with a nice little guitar break.

Eddie Platt (b. Eddie Platakis, Dec. 8, 1921, Cleveland, Ohio; d. Oct. 3, 2010, Akron, Ohio) was an American saxophonist.
Platakis was raised in Rossford, Ohio. He began playing in a band there at age 16 and used the stage name Platt starting in high school (including at his graduation). He played gigs in Rossford and Cleveland until World War II, when he served in the Army and Air Force. After the war he played in strip clubs with the Johnny Pecon Band.
In 1957, he began playing the Hotel Manger in Cleveland, a gig he would keep until 1967. While there, he recorded his first single for Epic Records, "Rock 'Em" b/w "Chinese Lullaby". His next single was a cover of The Champs' song "Tequila", which climbed to #20 on the U.S. Billboard Hot 100 in 1958. He also covered The Pets' hit "Chua-Hua-Hua", which in the 1990s was featured on the soundtrack to The Iron Giant.
Following the success of "Tequila", Platt appeared on Perry Como and Dick Clark's television shows, performing live where most acts lip synched. He remained in Cleveland to play shows but backed national acts when they toured there, including Pat Boone, Elvis Presley, Bobby Darin, The Everly Brothers, and The Brothers Four. He self-released a vinyl LP, Dance One, selling about 3,500 copies. The tune "Festival" from the album is the theme song of the Ohio All Nations Festival.
Platt died in Akron, Ohio, on October 3, 2010.

Eddie Platt - Popcorn
Posted by Devil Dick at 7:44 AM