The Lurkers - Out In The Dark EP - Beggers Banquet 19 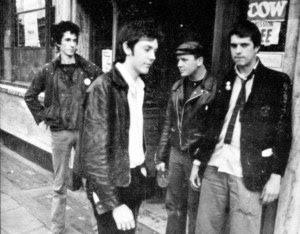 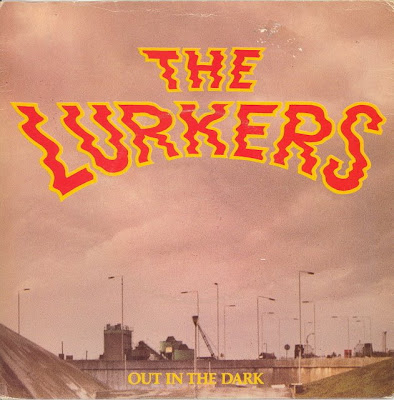 Formed in London in 1977, the first-generation punk outfit the Lurkers originally comprised vocalist Howard Wall, guitarist Pete Stride, bassist Arturo Bassick (born Arthur Billingsley) and drummer Manic Esso (a.k.a. Pete Haynes). Trumpteted as Britain's answer to the Ramones, the group debuted with the single "Shadow," released on the fledgling Beggars Banquet label; Bassick soon exited, and with ex-Saints bassist Kim Bradshaw, the Lurkers reached the U.K. Top Ten with the follow-ups "Ain't Got a Clue' and "I Don't Need to Tell Her." Their debut LP Fulham Fallout appeared in 1978, with God's Lonely Men arriving the next year. By the early 1980s, the Lurkers had dissolved, reuniting intermittently during the course of the decade to yield LPs including 1989's Edge of the Mountain and the live Wild Times Again.

The Lurkers get high marks for being relatively early in the punk game here (1979) and the 1st 2 tracks on this ep are pretty cool if not a little flat after 30 years, i'm sure in 79 this sounded like a bullet now i'm not so sure... but they lose almost everything they gained with by wearing their influences way to proudly on their sleeve on the 2nd side by ripping off The Ramones w/ Suzie is a Floozie and trying waaaaaaaaaaaaaaay to hard to be The Clash (Christ wasn't one clash enough?) w/ a "dub" or pub version of a pretty ripping song Cyanide... But what the fuck do i know...??? So what do you think? Important punk document or B grade mimicking?

You can grab it right here

A fine band. I'm On Heat is a minor classic.

Dont be too hard on them.
In 1977 and 78,bands like this were all people had.
Recording records with Woolworths guitars in garage studios for 40 quid was as good as it got.

Out In THe Dark is a bona fide classic from that time.
EVERY punk liked it.

Only passing of time is being unfair to these bands.

I dont know why,West Coast US bands selling millions would chop off their own right arm to be as real as bands like the |Lurkers were in their day.

Thanks for posting,i was wondering when id ever get in my boxes and pull out the 45!!

thanks for commenting tony/b, i was sorta on the fence with this 7 inch but the lp is pretty choice after all!