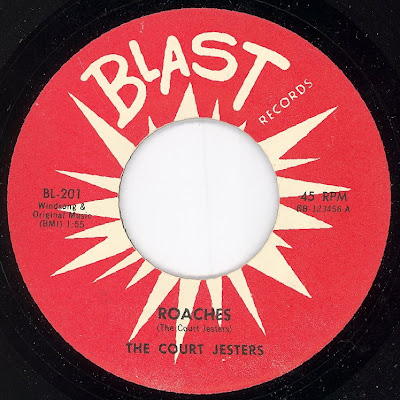 I’m sending this one out to several folks at once:

1st off to Vincent over at “FuFuStew” and to Todd & Brain over at “It’s Great Shakes” because Vincent just laid a great mix on everyone over at It’s great Shakes and included the Maskman & The Agents, Harmon Bethea version of this track.

Also to “ The Red Boy” because he also posted the same Maskman & The Agents (Harmon Bethea) track a while back on his fine blog and while I’m at it I’ll send it out to “The Hound” because I’m sure at some point this had to have hit the airwaves while he was doing his fanatic radio show back in the day at WFMU.

Alright, all that being said and ass kissing out of the way there is a small story about this 45 and how it kicked my record obsession into overdrive.

At the time of the purchase of this 45 many many years ago I was still pretty much a bottom feeder when it came to old school R&B and Doo-Wop, picking up Lloyd Price 45’s out of dusty bins for pennies. I had been buying records from “The Old Man” at “The Spot” but pretty much just stuff he had out on the table and never any of the GOOD STUFF he had hidden away in the back of his car. Well after a few years of this he started to run out of Chuck Berry and Fats Domino records for me as I pretty much had all the common stuff by then and it was time for both of us to “Move On”…

He knew I was not a Big Time Spender and showed me this record but said “You can’t afford this one”… Well, I said how much do you want for it? And he had it marked for $17.00! This was a HUGE leap for me because as I said I NEVER paid that much for a record before. But I bit the bullet shelled out the 17 bucks and took this thing home and was really blown away. It was like the Coasters on Crack and I loved it… Anyway since that day the old man and I have had a pretty good symbiotic relationship when it comes to records and since that day I stepped it up from single cell bottom feeder to next rung on the record food chain and that was the start of me paying anything over a few dollars for vinyl.

It all started with this here little kooky record:

The Court Jesters - Roaches
Posted by Devil Dick at 10:51 AM

Dave the Spazz sang Roaches at this years marathon for WFMU.

Try and find the part where he actually breaks his ankle during the song.

I do feel you on paying a mint for 45s... Record Ray always has the heat but boy does he make you pay for it... I've walked away from his table time and again having paid up to 30 bucks or more for a single record. Hell, it's worth it though, especially when you look at the resale values on Craig Morer's website.

Thanks for posting the 45 for sure. I'm anxious to hear it :)

Thanks for the shout out, when I get around to that USB equipped turntable I mentioned I'll send you Wilmar Walker's "Stomin' Roaches" on Phillips which makes a nice compliment to the Court Jesters tune (which I played all the time at WFMU, I think it's on the aircheck site four seperate times)....
Most I ever paid for a 45 was around $400 but I'd have paid a couple a grand for that copy of the Cledus Harrison record that was on Ebay last week, too bad the dealer took it down early, someone must've offered him a big bucks side deal. I've heard of it going for over 3 grand.. Most I ever sold a disc for was a Beale St. Boys 78 on Paramount which I got $985 for a couple of years back (also on Ebay). Tefteller offered me 3 g's for my Furry Lewis 78 and I turned him down only to have it get cracked when I moved from a tenement to a castle. No matter, it's only stuff, no?

i once sold a minty copy of the Soul Stoppers – Boilin’ Water/Let's Sit Down 45 on Capp records for a friend for close to 700 dollars. That was many years ago and i found my copy for CONSIDERABLY less but still more than i usually pay and now i just saw one go on ebay the other day for around 60 bucks so i'm a firm believer in waiting things out. with the exception of big time items like the hound speaks off almost everything will drop in value over time from either a shift in what’s "HOT" or more pieces turn up or things get booted or re-issued.... I've never really dabbled in 78's as i don't like to treat my stuff with kid gloves and i break every damn cool 78 i've ever had but i still buy them on the cheap if they are in front of me...

and yes indeed Hound it is only stuff but you have to admit that must have stung a little bit no???

i can't wait for you to get the USB deal sorted out. IO know you must have mad crazy goodies waiting to be shared that will humble us all....

Yeah, it stung! I also broke a mint 45 of Kid Thomas' Wolf Pack on Federal at a Hangover Hop by accident, and a copy of Kip Tyler's Rumble Rock/She's My Witch on Ebb (that one I've replaced, the Kid Thomas now goes for a fortune). That's why I don't really collect 78's unless their cheap. theFurry Lewis in question I got for free from Bob Quine. I still have it, big crack and all.....

Yeah, it stung! I also broke a mint 45 of Kid Thomas' Wolf Pack on Federal at a Hangover Hop by accident, and a copy of Kip Tyler's Rumble Rock/She's My Witch on Ebb (that one I've replaced, the Kid Thomas now goes for a fortune). That's why I don't really collect 78's unless their cheap. theFurry Lewis in question I got for free from Bob Quine. I still have it, big crack and all.....

Damn! You fellas are serious...