William DeVaughn - Be Thankful For What You Got 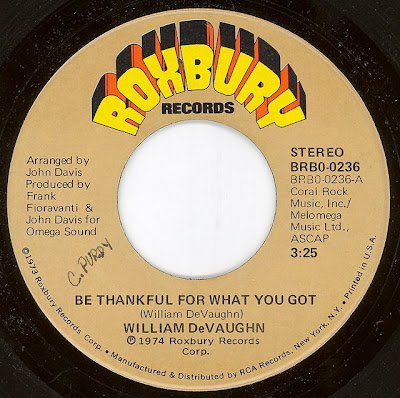 Although I usually like my soul and funk on the heavier and funkier side i can get down with some smoothness now and again. Here's a cut i love and enjoy and I should actually try and live by the title more than i actually do, surly and ungrateful bastard that I am...

This aint a rare side but damn if it aint fucking cool as shit...

William DeVaughn (b 1948, Washington D.C.) is an American R&B singer, songwriter and guitarist, best known for the hit song "Be Thankful for What You Got".

DeVaughn was a salaried government employee as a drafting technician, part-time singer, and member of the Jehovah's Witnesses. He wrote "Be Thankful for What You Got" in 1972, and paid $900 for its recording at the Sigma studio in Philadelphia. Remarkably, the session featured members of the MFSB group - guitarist Norman Harris, drummer Earl Young, bassist Ron Baker, and vibist Vince Montana - and was produced by Allan Felder. The owner of Sigma, Frank Fioravanti, was impressed, and secured its release on the Roxbury Records record label.

The record sold nearly two million copies on its release in spring 1974, reaching #1 on the U.S. R&B charts and #4 on the Billboard Hot 100 chart, selling a million copies. With a sound and content influenced by Curtis Mayfield, its simple and encouraging lyrics hit home, to the extent that it became featured on gospel radio stations.

DeVaughn released an album, featuring mostly songs of an overtly religious character, and the second single, "Blood Is Thicker Than Water", made the R&B top ten and the pop top fifty later in 1974; "Give the Little Man a Great Big Hand" had minor success early the next year. Live, DeVaughn preached to and admonished his audience from the stage. He lost interest in the music industry not long after, working in a record store and again as a draftsman. His 1980 album Figures Can't Calculate (TEC) included the title song, which was a minor R&B hit, and a remake of "Be Thankful for What You Got".

William DeVaughn - Be Thankful For What You Got
Posted by Devil Dick at 9:01 PM

Thanks for a great track!

Massive Attack does a great cover of this song...