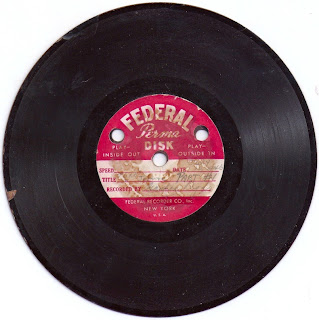 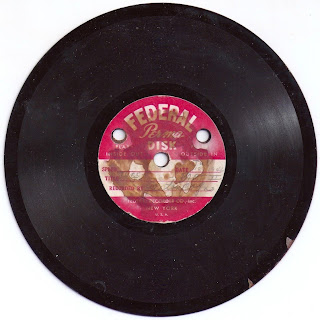 Another lost item found digging. These things always kinda bum me out when i find them because they were obviously meant for family & not some knucklehead digging for records. They just get discarded and lost forever and i'm sure no one in the family gives a shit. So when i turn them up and they are cheap i buy them. I like listening to them. It's sorta like a time machine or like being an audio peeping Tom. You go back to 1946 and hear a little message from another time and place that was never meant for you to hear. This one from Turk & Jenne. Looks like they were sending it to their Ma. Maybe one of these days someone will google turk & jenne or Gaston Ragno and find it. Probably not... They really didn't have a whole lot to say other than Jenne is gonna be 11 and Turk likes the phrase Hey-Bop-A-Re-Bop, as he says it on both sides of the record. Basically just horsing around. They start speaking a different language. Not sure, but i think it might be Italian? Most people won't find any interest in this and that's fine, but i look at it as audio archeology... either dig in or don't.

If you missed it and or are interested, i did a similar post about a record from a millitary man HERE:

I do dig. Thanx a heap for sharing this...
"Hey Bop A Ree Bop": Captain Beefheart

oh wow, this is pretty neat! I can't really think of any clever ways to describe it. I like the 'sound' though, ...'texture' maybe? something about this makes me feel really good for odd reason. reminding me of simpler times, hanging out with my grampa and grandma or something. we're so spoiled with technology today its hard to grasp how exciting this would have been back in the day.
what a great and unique artifact this is! once again, thanks for sharing. you never disappoint.

thanks for the comments guys i do really appreciate them and glad someone likes.