Smoke Rise - I Need A Woman To Love 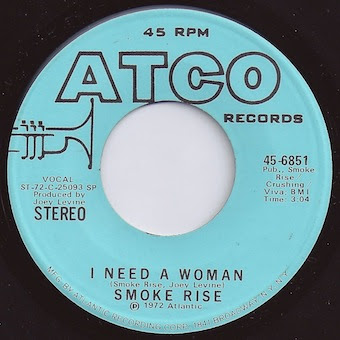 Big Dumb Thud Rocks w/ a Neanderthal Pace... I Love this shit.... Hard Rock for the sake of Rocking Hard. This kind of stuff is the beginning of Heavy Metal. Knuckle Dragging heavy guitar rock singing about needing a "woman with some meat between her thighs". Not rocket science, but it gets the point across.. File somewhere between Spooky Tooth & Nazereth.

Here is the wiki info:

Smoke Rise was an American progressive rock band in 1969-1972. In 1970, they created the first American Rock Opera, The Survival of St. Joan, based on a play and a libretto by James Lineberger and produced by Oscar-winner Stephen Schwartz and Dave Blume. Smoke Rise was known as a very melodic group with smooth 3 and 4 part harmonies, guitar solos and fills, and a tight rhythm section that rocked with the best groups of the 60's and 70's.
Notable productions

The Buffalo Production of The Survival of St. Joan set box office records[citation needed] in the fall of 1970 at the Studio Arena Theater in Buffalo, NY. The New York Off-Broadway production was staged at the Anderson Theater in the East Village, with Gretchen Corbett (later of The Rockford Files fame) playing the title role. Another Oscar winner, F. Murray Abraham, was also a member of the cast.
The artwork by Doug Jamieson for the cover of the double album (Paramount PAS 9000) was displayed in the New York Museum of Modern Art[citation needed].
Members


Smoke Rise - I Need A Woman To Love

They completely dispense with the psych feel that many bands at this time had.