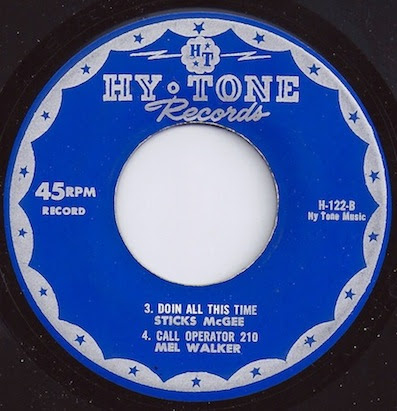 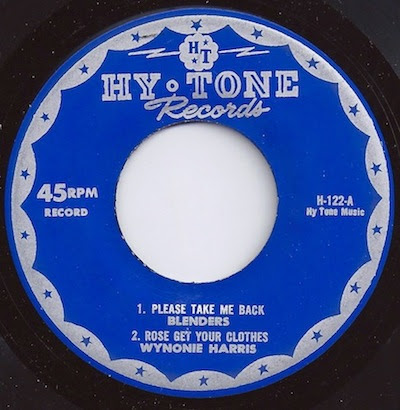 Great 4 song EP of rare early R&B tunes. I'm pretty sure these tunes were only originally available of 78's and then this EP was bootlegged sometime in the 50's or early 60's to share the wealth. Maybe if he is still around THE HOUND can shed some light on this subject?

What little i know about each performer is this: Sticks McGee or Stick McGhee was younger brother of Brownie McGhee. Mel Walker was born Melvin Lightsey in 1929. Walker was jailed on narcotics charges in the early 1950s and is reported to have died young. The Blenders I think were a west coast group that somehow had ties to groups like the Jacks and Cadets...? Or Am i Just making this up? & the most famous of the 4 Wynonie Harris, Born 24 August 1915, Omaha, Nebraska, USA. Died: 14 June 1969, Los Angeles, USA.

American rhythm & blues vocalist with a hot-n'-raunchy rock and roll style and dance skills. Harris really began his career touring with Lucky Millinder's band, eventually cutting his first recording with them in May 1944. After quitting the band he signed up to Leo & Edward Mesner's "Philo" label in the spring of 1945, with Johnny Otis leading his line-up.

He recorded on further labels, gaining popular success on the King label in the late '40s. By the mid '60s he was recording on Chess and performing with artists such as T-Bone Walker and Big Mama Thornton.

Harris died of throat-cancer, aged 53. His work has subsequently been honored by inductions into several 'Halls of Fame', including the Blues Hall of Fame, Memphis, Tennessee.


Sticks McGee - Doin All This Time

Blenders - Please Take Me Back

Wynonie Harris - Rose Get Your Clothes

The Mel Walker tune kinda reminds me of Charles Brown. Kool shit! What the fuck happened to divshare? Slow as shit! Can't even sample the track have the time. They should scan for malware?

not sure but divshare sucks!!!!! glad u like the tune!