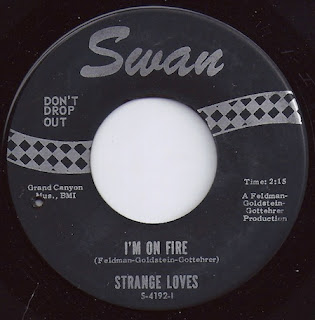 A little rockabilly rocker from 1964 from "Strange Loves". The flip "Love, Love" hit the charts and a year later as The Strangeloves they had a hit with "I Want Candy". Wiki info below:


The Strangeloves were a fictional band created in 1964 by a New York-based American songwriting production team who pretended to be from Australia. Consisting of Bob Feldman, Jerry Goldstein, and Richard Gottehrer, The Strangeloves most successful singles were "I Want Candy," "Cara-Lin", and "Night Time". Before the invention of The Strangeloves, the three-member team ‒ often going by FGG Productions ‒ had already scored hits for other artists including 1963's "My Boyfriend's Back" by the American female group, The Angels.

According to the press releases, The Strangeloves were three brothers named Giles, Miles, and Niles Strange who were raised on an Australian sheep farm. The brothers' fictional backstory involved getting rich with the invention of a new form of sheep crossbreeding (the long-haired "Gottehrer" sheep allegedly registered with the Feldman-Goldstein Company of Australia) which allowed them the time and financial freedom to form a band. The story did not exactly capture the public's imagination, but The Strangeloves' singles still performed respectably well especially in the United States.

The Strangeloves' first single, "Love, Love", was actually released under the group name, Strange Loves, and only reached No. 122 on the US Billboard Hot 100. The group's subsequent releases were as The Strangeloves.

When their second single, "I Want Candy", became a hit in the middle of 1965, The Strangeloves found themselves in the unfamiliar and uncomfortable position of performing as live artists. This short-lived experience was followed by a road group composed of four session musicians who had actually helped to record the Strangloves' songs. The musicians in the initial road group were bassist/vocalist John Shine, guitarist Jack Raczka, drummer Tom Kobus, and saxophonist/vocalist Richie Lauro.
In early 1966, the lineup was replaced by a trio of FGG studio musicians that more closely adhered to the founding concept: guitarist Jack Raczka (Giles Strange), drummer/vocalist Joe Piazza (Miles Strange), and keyboardist/vocalist Kenny Jones (Niles Strange). In 1968, bass player Greg Roman became an integral part of the band.
While on the road in Ohio in 1965 as The Strangeloves, Feldman, Goldstein, and Gottehrer came upon a local band known as Ricky Z and the Raiders led by Rick Derringer (known as Rick Zehringer at the time). Recognizing their raw talent, the producers immediately brought Derringer and his band to New York, recorded Derringer's voice over an existing music track from The Strangeloves' album, I Want Candy, and released "Hang on Sloopy" as a single under the name The McCoys.[1]
The Strangeloves' only LP, I Want Candy, was released in 1965 on Bert Berns' Bang Records, with several of the album songs having been released as singles. Other singles by The Strangeloves appeared on Swan Records and Sire Records.

The Strangeloves continued recording singles, with moderate American success, through 1968. In their "home" country of Australia, they only scraped the very bottom of the singles charts, but interestingly, a real Australian group "Johnny Young & Kompany" had a hit in their country in 1966 with a cover of the Strangeloves' "Cara-Lin" (re-titled "Cara-Lyn").
The FGG trio also collaborated on a charting 1965 single credited to The Beach-Nuts. As well, Feldman and Goldstein (without Gottehrer) recorded charting hits as Rome & Paris in 1966, and as The Rock & Roll Dubble Bubble Trading Card Co. of Philadelphia 19141 in 1969. (Prior to the creation of the Strangeloves, Feldman and Goldstein had also recorded a couple of non-charting singles as the duo 'Bob & Jerry in 1961-62.) As well, on his own Goldstein wrote, produced and arranged a 1966 solo single "Watch The People Dance" under the name Giles Strange, which failed to chart.

The following credit appeared on every Strangeloves record (as well as other records produced by FGG): "arranged and conducted by Bassett Hand." In fact, there is no such person as Bassett Hand; it was a tongue-in-cheek pseudonym for the Strangeloves themselves. Two instrumental singles credited to Bassett Hand were released around the time The Strangeloves were getting started: "In Detroit" (1964) and "The Happy Organ Shake" (1965). Neither single charted nationally, although "In Detroit" appeared on a Chicago top-40 list as an "Up 'N' Coming" song in October, 1964.

Their songs have been covered by David Bowie, Bauhaus, The J. Geils Band, The Fleshtones, and by Bow Wow Wow.
Gottehrer went on to later fame as a record producer of early CBGB's luminaries such as Richard Hell & The Voidoids, The Fleshtones, and Blondie, as well as being the co-founder of Sire Records along with Seymour Stein. He also worked with Robert Gordon, who was one of many who revitalized rockabilly in the late 1970s, and produced the critically acclaimed first album by Marshall Crenshaw.
In his role as a producer and manager, Goldstein also continued to have an effect on the music world. He suggested to the band Nightshift that they team up with Eric Burdon, which became War, and had the Circle Jerks on his Far Out Productions management company and LAX record label.

Love the annotation on this. I didn't know the entire back story till now.