The Holidays - Watch Out Girl 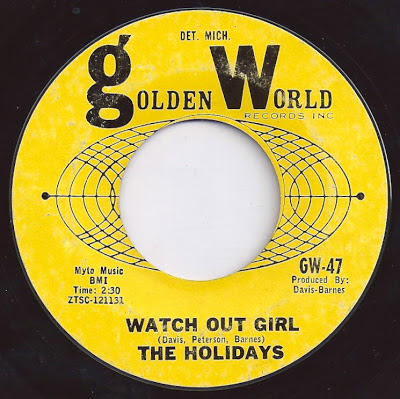 I've been bored and digging through boxes of old 45's at home while recouperating from surgey. The one good thing is that I'm finding some nice 45's i didn't even know i had. This is another one. Great little Detroit soul nugget from 1966. Not rare or anything, just awesome.

As for The Holidays:

The Holidays were a Detroit group who are remembered for a record, "I'll Love You Forever," (1966) that their members didn't even appear on. Edwin Starr sang lead and J.J. Barnes and Steve Mancha supplied backing vocals, and some say that Eddie Anderson made the session too. When the record hit, producer Don Davis revitalized The Holidays with new members to capitalize on the song's success. Starr, Barnes, and Mancha never performed as The Holidays.
The original Four Holidays began as the Fresandos, who cut "Your Last Goodbye" on Star-X Records in 1959. Renaming themselves the Four Holidays, they did "Deep in My Heart" in 1961 on Master Records. Jimmy Holland, Jimmy Ruffin, and possibly the Barksdale brothers (Cleo, Robert, and James Mitchell) were the other members; all may have sang with the group at one time or another, with one bouncing in as another bounced out.
Ruffin recorded a solo shot, "Don't Feel Sorry For Me" b/w "Heart," on Motown's Miracle label in 1961. He was drafted and didn't resume recording until his duty was over. Two singles fell on Markie Records in 1963-1964 -- "Grandma Bird" and "I'll Walk Right out That Door." Nothing was selling, and their next appearance was an uncredited backing of Emmauel Laskey on "Lucky to Be Loved By You" b/w "Our World" (1965). It's believed that Ruffin recorded on the Markie releases; he signed with Motown upon returning from active duty and began recording on their Soul subsidiary in 1964.
A stint with Golden World Records followed, and their first release, "I Love You Forever," soared to number 36 in 1966. After a second single on Golden World, they went with Revilot Records for three flops (1967-1968). The group now consisted of Jimmy Holland, Jack Holland, Jay Reid, and Tony Hestor. Hestor was a songwriter; he wrote the B-side of a Marvelettes' single, "A Little Bit of Sympathy, A Little Bit of Love," on Tamla Records in 1964. He also did a solo, "Just Can't Leave You" b/w "Watch Out," on Karate Records in 1966. The Holidays next appeared on Soulhawk Records with "My Baby Ain't No Plaything" b/w "Maybe So, Maybe No" (1969); Hester and Richard Wylie wrote both sides, it made a little noise locally and Westbound Records picked it up and credited it as the New Holidays in 1970. Jimmy Holland also cut a non-selling solo release on Blue Rock in 1965 and one for Syco Records.

The Holidays - Watch Out Girl
Posted by Devil Dick at 7:40 AM

Huh. have always liked "Maybe So, Maybe No, what a great back story. Thank you!