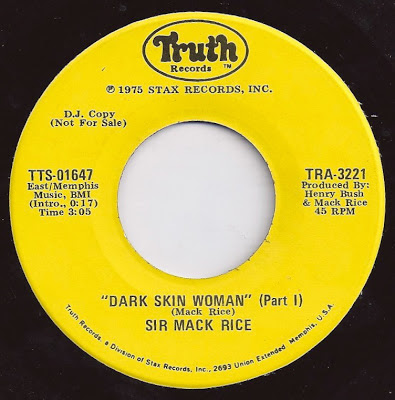 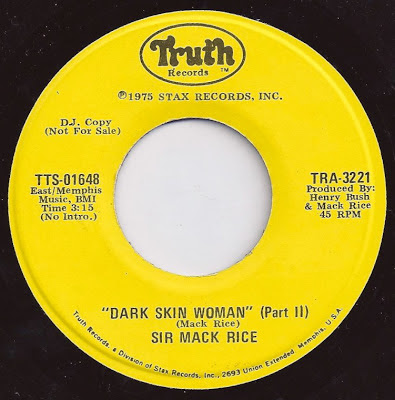 This record makes me feel good. And not just because the tunes are great but because this was a gift from a friend that came just at the right time. I hadn't been feeling to well starting last wed. night and on through the weekend. I wound up going to the hospital Monday night with what i found out was acute appendicitis. With in a few hours i was in the operating room. A quick night at the hospital and return home to a new package sent from a record friend who has been more generous through the years with vinyl than i can ever re-pay him back. So i know i've gone on rants before about record ass-wipes and how many unscrupulous record jerks there out out there but for everyone of those there seems to be more "good guys" than bad. This is from one of them. The good guys.

As for Sir Mack Rice and this track:

Mack Rice (born Bonnie Rice, November 10, 1933, Clarksdale, Mississippi), is an American songwriter, whose compositions have been performed by many well-known artists, including The Staple Singers, Ike and Tina Turner, Albert King, Johnnie Taylor, Shirley Brown, Rufus Thomas, Etta James, Billy Eckstine, Eddie Floyd, Buddy Guy, The Rascals, Wilson Pickett, Albert Collins, Busta Rhymes, Lynyrd Skynyrd, Otis Clay and The Blues Brothers (in Blues Brothers 2000).
Some of his better-known songs include "Respect Yourself", "Betcha Can't Kiss Me (Just One Time)", "Cheaper to Keep Her", "Cadillac Assembly Line", "Money Talks", "Cold Women With Warm Hearts", "Do the Funky Penguin, Pt. 1", "It Sho Ain't Me", "Santa Claus Wants Some Lovin'", among others. His best known composition and only hit as a solo performer is "Mustang Sally."
Rice began his work in the R&B field in the 1950s based in Detroit, performing with the Five Scalders in 1956 and with the Falcons (fellow band members included Eddie Floyd, Wilson Pickett and Joe Stubbs) from 1957 to 1963. He performed as a solo vocalist in the years to follow, but his biggest successes were as songwriter for other artists on labels like Stax and others in the 1960s and following decades. He began his solo vocalist career at Stax in 1967, recording on Atco Records beginning in 1968. Rice is one of the few musicians whose career touched both Motown and Stax Records.
In 1992, backed by the soul band The Dynatones, Rice released his first solo album, "Right Now" on Blue Suit Records. On it he reprises a number of his hit songs along with a mixture of new tunes.
Rice lives in the Detroit area, and is still performing.

The tune from 1975 but it right at the year when funk started turning disco but it's still funky enough to stay clear of the disco ready for the dancefloor production or corniness of later years disco syrup....

Hey Double D, hope you are felling better by now, know that to some of us out here you are that "friend" who drops the right song at the right time as well. Keep it up. Doesn't matter how cute your appendix is, get it the hell out of there! Get to the Choppaaa!

haha! thanks AA! i'm glad soem folks are out there and digging the crap i dish out! and yeah i am on the mend. not perfect but not too shabby!