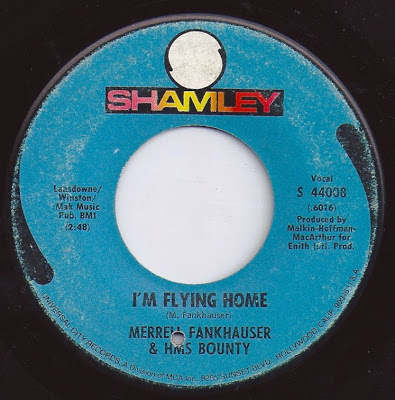 Merrell Wayne Fankhauser is an American singer, songwriter and guitarist who was most active in the 1960s and 1970s with bands including the Impacts, Exiles, Fapardokly, HMS Bounty, Fankhauser-Cassidy Band, and MU.

In 1960 he joined a local band called The Impacts as lead guitarist. Their Ventures-influenced sound developed a strong following at the start of the surfing scene. In 1962 they recorded an album which was later released, without the band's knowledge, by Del-Fi Records, and which included a tune "Wipe Out" which Fankhauser suggests later provided the basis of the hit by the Surfaris.

Fankhauser left the band and moved to Lancaster, California. There he met Jeff Cotton (later of Captain Beefheart's Magic Band), and in 1964 they formed The Exiles. The band - which also included John "Drumbo" French - had some success but broke up. Fankhauser moved back to the coast, formed a new band, Merrell and the Xiles, and had a minor hit with "Tomorrow's Girl" in 1967. An album followed which included old Exiles songs and newer psych folk material. For the album the band was credited as Fapardokly, taking its name from the surnames of the original members - Fankhauser, Dan Parrish, Bill Dodd and Dick Lee. Despite its later cult acclaim, the album was not a success. Fankhauser and Dodd then formed another, more overtly psychedelic, band with Jack Jordan and Larry Meyers, naming it HMS Bounty. They won a recording deal with Uni Records, and their self-titled album was released in 1968, followed by the single "Tampa Run". However, success was again thwarted, by personal and record company problems and the band split up.

Reuniting with Jeff Cotton in 1970, Fankhauser then formed the group MU. In 1971 their first album was released and became a radio hit. Increasingly fascinated by legends of the lost continent of Mu, Fankhauser then relocated to the Hawaiian island of Maui in Feb. 1973. A second MU album, without Cotton, was recorded in 1974, but not released until the 1980s. Fankhauser then recorded a solo album, "Maui", issued in 1976.

Fankhauser continued to record, occasionally with friends including John Cipollina and more recently Ed Cassidy of Spirit, as well as producing new surf albums credited to The Impacts.

I just pulled this out of a box of junk 45's. It's a little played w/ some snap, crackle & pop but a pretty great little psychedelic nugget. Very happy to have found it. Enjoy.

Good tune Dick, thanks. I hope you can drink the good beer while recuperating.

JL, i'm actually using this opportunity to cut back on the beers and maybe shed a few pounds//// boy does this suck.....