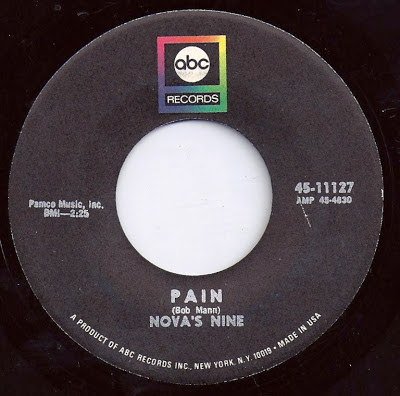 The band formed from Gary Brown's earlier band, Creations, and the Mann brothers', Firebirds. Ultimately they became students of Huxley and changed their name to Brave New World. As Nova's Nine, they recorded "Pain" in 1968 on Heritage Records, later picked up by ABC.

For a nice little "pain" story check out Echo's In The Wind.

I see this tagged as Northern Soul (must be the horns?) but it has a Garage rock feel to me.... Love that organ in the background.

As with many songs from the era, it is way too short and man, it sure woulda been cool if they threw a fuzz guitar solo in there.

Any way, cool tune. Check it out.

Not sure what I was expecting but when this puppy unwinds it's hard to stop grooving. Agreed on the lack of a fat and fuzzy solo, but I appreciate the share, great find! Thanks Double D.

yeah if that had a fuzzy solo it would push it over the top! but i dig it anyway! and not a bad find some thing thrown in a box i haven't even looked at in years....
cheers AA!