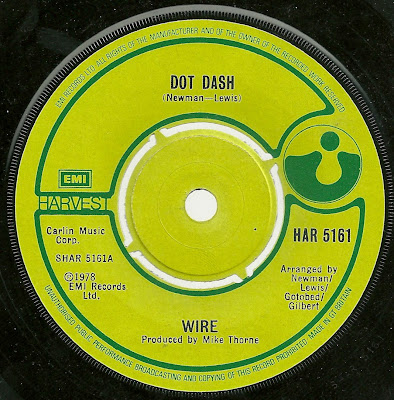 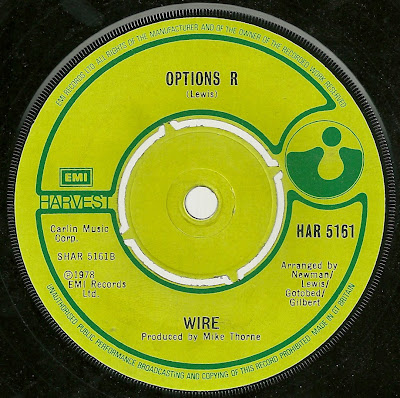 Wire are an English rock band, formed in London in October 1976 by Colin Newman (vocals, guitar), Graham Lewis (bass, vocals), Bruce Gilbert (guitar), and Robert Gotobed (drums). They were originally associated with the punk rock scene, appearing on the Live at the Roxy WC2 album—a key early document of the scene—and were later central to the development of post-punk.
Inspired by the burgeoning UK punk scene, Wire are often cited as one of the more important rock groups of the 1970s and 1980s. Critic Stewart Mason writes, "Over their brilliant first three albums, Wire expanded the sonic boundaries of not just punk, but rock music in general."

This is their 3rd single from 1978. Originally this came w/ a nice picture sleeve but sadly mine is missing.... but the tunes are still great.

"Dot Dash" was running through my head non-stop on Wednesday.

THANK YOU VERY MUCH!!!!!
I just saw "Carlos" and this and "Ahead" have been playing on a loop in my computer ever since.
Let me know if you have any interest in Brazilian Punk or post-Punk and I'll send a few MP3s your way.