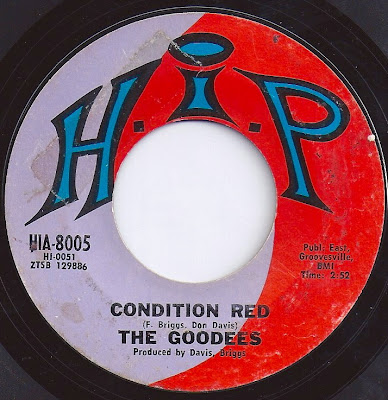 The Goodees (Kay Evans, Sandra Jackson and Judy Williams) were an American pop music girl group who enjoyed brief popularity in the late 1960s. Formed in Memphis, Tennessee, the group is best known for the minor hit "Condition Red", a teen melodrama that bore a striking resemblance to the Shangri-Las hit "Leader of the Pack".
The three girls became friends while attending Memphis' Messick High School. Interested in music, they started singing at school assemblies and local events. Their “break” came in 1967 when they won a local talent contest. The winning prize included an audition with Stax Records. Stax signed the trio to its newly formed HIP subsidiary.
Goodee Sandra Jackson more recently worked at SoulsVille USA, an on-line museum that chronicles the history of Memphis rhythm and blues.
The band's song "Condition Red" was their only hit, peaking at #46 on the Billboard charts. "Condition Red" can be found on girl-group compilations such as Rhino's One Kiss Can Lead to Another and the first volume of the Where the Girls Are CD series.

The Goodees - Condition Red
Posted by Devil Dick at 6:52 AM