Chick Willis - Don't Let Me Ketch You (With Your Britches Down) 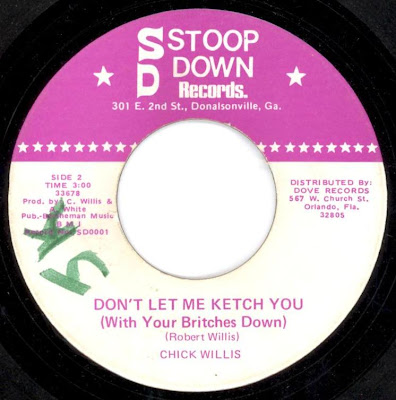 Chick Willis served in the military in the early 1950s before working as a chauffeur for Chuck Willis during his heyday. He won a talent show at the Magnolia Ballroom in Atlanta, Georgia and made his first record in 1956, with the Ebb Records' single "You're Mine". Initially, he only sang, but learned guitar while touring with his cousin; Guitar Slim was one of his foremost influences.
After Chuck's death in 1957, Willis played with Elmore James, recording singles through the 1960s for Atco and other labels. His 1972 release, "Stoop Down Baby", was a jukebox hit but secured no radio airplay, due to its sexually explicit content. He released a steady stream of albums on Ichiban Records in the 1980s and 1990s, and continued to record into the 2000s.

Chick Willis - Don't Let Me Ketch You (With Your Britches Down)
Posted by Devil Dick at 12:03 AM