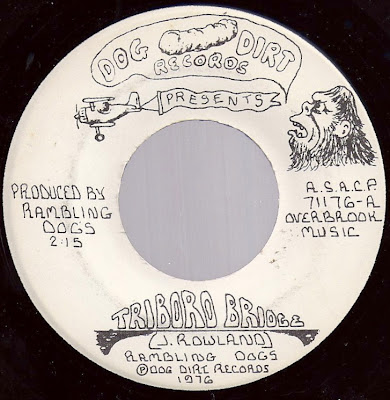 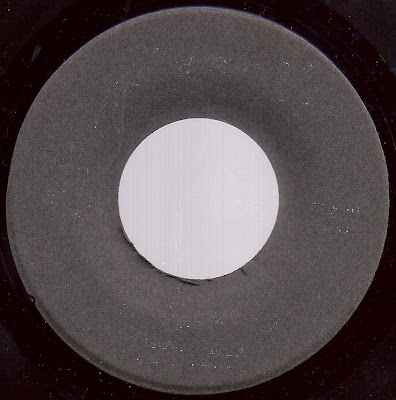 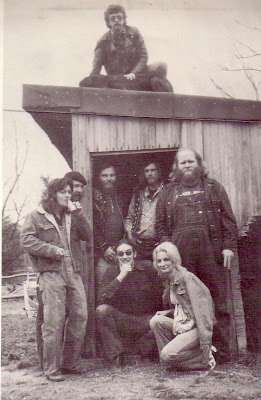 So i picked this thing up not knowing anything about it but it looked kinda weird and man am i glad i did. The A side is not really my thing. Its a goofy calypso tune done in a kinda "Fugs" way about traffic here on the east coast. It's OK, but the winner is the Flip called "Eye Of The Needle" which is also done in a sorta Fugs or early Country Joe and Fish style psychedlic late 60's trip out vein but from 1976....

This 45 was released under "Rambling Dogs" but They realeased a full length album under the name "Elmer City Rambling Dogs" in 1975. And this 45 was realeased with only the label on the A side and i only know that the flip is called eye of the needle because while looking for info on the band i stumbled upon another blog called Glorify The Turd where the lead "screamer" Teeny Tar of the "Elmer City" Rambling Dogs posted the folowing info:

the elmer city rambling dogs also released a 45 record. the a side was a song by james rowland called TRIBORO BRIDGE. it was about fighting traffic in new york city trying to get to the TRIBORO BRIDGE. the b side was a song by me teeny tar called EYE OF THE NEEDLE. it was an anti-drug song. the a side only has a label which has the dog dirt records logo and underneath that is an 1940 airplane pulling a banner that says “presents” and to the right of that is a sideway headshot of king kong looking at the banner. the b side has no label but it does have eye of the needle.

talk about rare. i don’t think you could ever find this.

You can read the whole article and comments from band members HERE:

Sadly after reading the entire comments section teeny tar along w/ a few other members are no longer with us. But thanks to them for creating such a cool little obscure musical nugget. Now i have to track down the full length!

Rambling Dogs - Eye Of The Needle
Posted by Devil Dick at 10:49 AM

I knew your handle looked familiar--I'm a follower. At any rate, I don't think the LP is that pricey--probably $20 to $50, unless you get lucky and find it at a flea market. I ran across it for the first time in years at a convention about a year ago--it doesn't turn up much, but is nowhere near as rare as this thing.

thanks mrpoopy, ima add u to my links! aces!