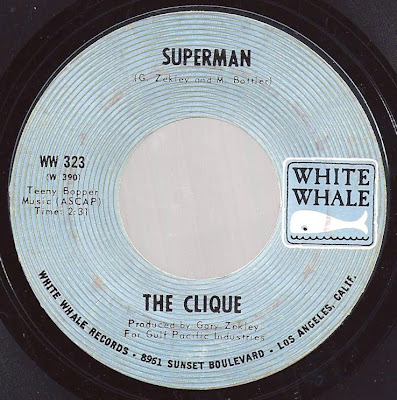 In honor of R.E.M. breaking up i give you a song they covered some long time ago. Not the biggest R.E.M. fan here but i dated a bunch of chicks who were and i guess some of that rubs off over time... Don't hate on them, don't love them... Check out my last post of them doing Dark Globe from Syd Barrett.

"Superman" is a 1969 song by the Texas band The Clique, made more famous in 1986 when recorded by R.E.M.
It was written by Mitchell Bottler and producer/songwriter Gary Zekley and originally released as the b-side to The Clique's hit "Sugar on Sunday," itself a cover of a Tommy James and the Shondells song.
R.E.M. recorded it for their fourth album, Lifes Rich Pageant. It was released as a single and received a fair amount of radio play, but did not chart on the main U.S. singles chart, though it did reach #17 on Billboard magazine's Mainstream Rock Tracks chart.

Lead singer Michael Stipe was not as enthusiastic about recording the song as the other band members were, and as a result bassist Mike Mills debuted on lead vocals with Stipe providing background.

The Clique - Superman
Posted by Devil Dick at 12:01 AM