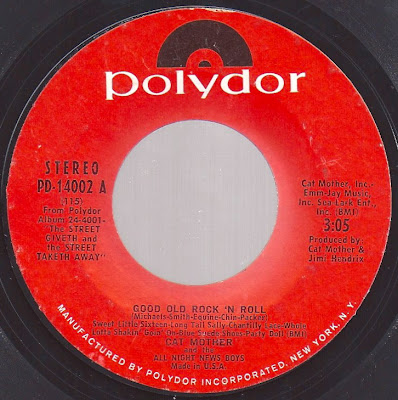 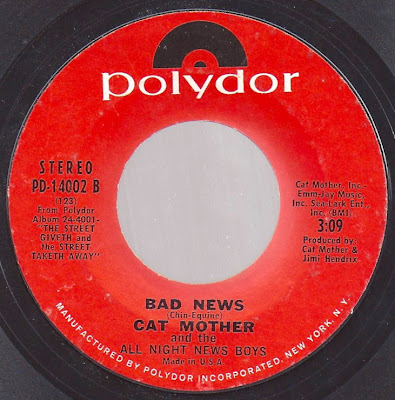 Just some good old Rock and Roll music. Produced by Jimi Hendrix. The record is a little noisy but its a crappy styrene copy and i only paid 25 cents for it! BUT HENDRIX PRODUCED IT!

Cat Mother and The All Night Newsboys was co-founded by Roy Michaels and Bob Smith in the fall of 1967. Michaels had previously been playing with Stephen Stills and Richie Furay in the Au Go Go Singers, prior to the formation of Buffalo Springfield. Initial members were Bob Smith on vocals, keyboards and drums, Roy Michaels on vocals and bass guitar, William David "Charlie" Chin on vocals and guitar, Larry Packer on guitar and violin, and Michael Equine on drums and guitar. Jay Ungar was also initially associated with the group, on violin, and rejoined the group for their second album. Core band membership consisted of Michaels, Smith and Equine.
The band's popularity in New York grew during 1967 and 1968, through regular appearances at the Cafe Wha?, which led to an engagement as the house band at New York's Electric Circus.
The band was particularly notable for releasing a Top 40 hit in the summer of 1969, reaching no. 21 on the U.S. Billboard Pop Chart, with the rock and roll medley "Good Old Rock 'n' Roll". The medley included cover versions of "Sweet Little Sixteen" by Chuck Berry, "Long Tall Sally" by Little Richard, "Chantilly Lace" by The Big Bopper, "Whole Lotta Shakin' Goin' On" by Jerry Lee Lewis, "Blue Suede Shoes" by Carl Perkins and "Party Doll" by Buddy Knox. The single and the band's first album, The Street Giveth and the Street Taketh Away, were produced by Jimi Hendrix. The association with Hendrix came through the band meeting him in New York City. Cat Mother was initially managed by Michael Jeffrey, who also managed Hendrix. Cat Mother opened for Hendrix on several occasions, as a result. Other notable early appearances included playing at the Toronto Rock and Roll Revival, the historic concert headlined by The Doors, where John Lennon and The Plastic Ono Band appeared in a surprise performance.
Other popular songs by the band included "The Street Giveth and the Street Taketh Away", "Strike a Match and Light Another", and "Cat Mother". However, the band's principal chart success remained "Good Old Rock 'n' Roll", which was not representative of the diversity of its sound. Similar to contemporaries Moby Grape, Poco and the post-1967 Byrds, as well as predating The Eagles, Cat Mother was one of the first rock bands to blend rock and country music.
As part of the band's actions to sever ties with manager Michael Jeffrey, the band relocated to San Francisco as of 1970, and later settled in the Mendocino area. By the time of their 1970 second album, Albion Do-Wah, they were joined by Jay Ungar (violin, mandolin, guitar, & vocals), Paul Johnson (guitar), and special guest Lyndon Lee Hardy (vocals on two songs). The third album, Cat Mother, released in 1972, featured Michaels, Smith and Equine joined by Charlie Prichard (lead & slide guitar) and Steve Davidson (congas & percussion). By the time of the band's final album, Last Chance Dance, in 1973, Charlie Prichard had been replaced by Charlie Harcourt on guitar, harmonica and vocals. The band continued to perform until 1977.

Cat Mother and the All Night News Boys - Bad News
Posted by Devil Dick at 12:01 AM

jimi hendriks(?!?)
i havent even downloaded it and ive already played it into submission!
110%AAA+++

Michael Equine (Cat Mother) is on Facebook alive and well in Mendocino, CA and has all (4) cd's re-mastered by him for sale!!!

I just bought the set and it sounds great. He is the last survivor of the original members.