The Tiffany System - Let's Get Together / Wayward One 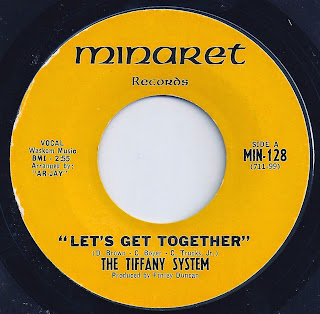 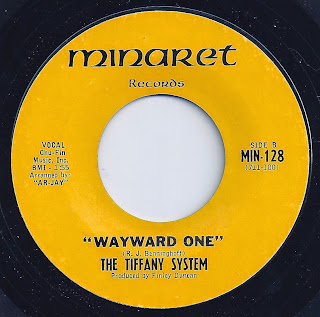 Couple of pop/psych Byrds sound a likes from the Tiffany System from 1967 on the Minaret label. A side is a cover of the Chet Powers (aka Dino Valenti) penned song. It was covered by many people through the years. The flip is a very Byrds sounding pop psych tune. Pretty good stuff.

This Jacksonville, FL-based mid-'60s folk-rock trio was notable twice over, both for their actual sound, which was popular enough to earn them a more than decent living with local performances, and for the presence in their original lineup of future Allman Brothers drummer Butch Trucks, as well as future Santana bassist David Brown, and future Cowboy guitarist Scott Boyer. The band actually started out as "The Bitter End" circa 1966 at Florida State University in Tallahassee. Boyer, Brown, and Trucks had put the trio together with the intent of applying electric instruments to Dylan songs, à la the Byrds, and they became so successful just doing local and regional gigs that Boyer ended up dropping out of college. According to Boyer in an interview with Michael Buffalo Smith on the Swampland website, they crossed paths with lots of other local talent that showed promise, including an early lineup of Lynyrd Skynyrd (then still known as "The One Percent") and the Second Coming, whose members included Berry Oakley and Dickey Betts. The Tiffany System cut a single of "Let's Get Together" b/w "Wayward One" in 1968 for the local Minaret label, the B-side of which was impressive enough to end up as the opening track on Psychic Circle's The Electric Coffee House compilation, 40 years later.
After a move to Miami and some discussion, the group was re-named the 31st of February and signed to Vanguard Records, for which they released one self-titled album under that name in 1969, recorded at Bradley's Barn. Ironically, even as that album was making its way to stores -- and near total critical and commercial neglect, its Baroque pop sound being a little behind the times by then -- the group had evolved beyond a three-piece with the addition of a pair of brothers, Duane Allman and his brother Gregg. But that configuration, though they did play a lot around Miami, never got to make their planned second record for Vanguard, and went their separate ways. The Allmans went on to immortality, with Trucks as part of the band, whilst Boyer became part of Cowboy, alongside ex-We the People guitarist Tommy Talton et. al, and David Brown became a member of Santana in 1969, as well as working with Papa John Creach, Boz Scaggs, and others.

The Tiffanny System - Lets Get Together

The Tiffany System - Wayward One
Posted by Devil Dick at 8:50 PM

Nice couple of tunes here. Maybe you shouldn't write your labels when you're drunk. Made me laugh though...

Interesting music tunes . Thanks for your time.