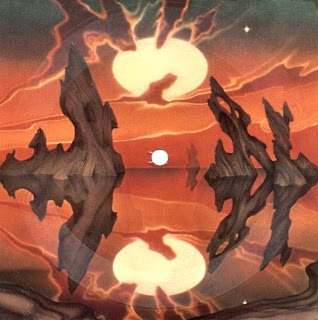 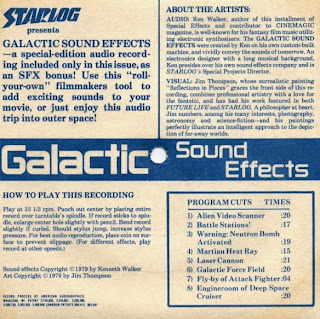 Do you need some cheesy "galactic" sound effects from 1979? Of course not, but here they are anyway... Included as an "SFX" bonus in an issue of STARLOG magazine.

I'm sure in '79 a lot of 10 year old boys thought this was the shit but yeah, now it's pretty tame sounding by today's standards....

Audio:
"Ken Walker, author of this installment of Special Effects and contributor to CINEMAGIC magazine, is well-known for his fantasy film music utilizing electronic synthesizers. The GALACTIC SOUND EFFECTS were created by Ken on his own custom-built machine, and vividly convey the sounds of tomorrow. An electronics designer with a long musical background, Ken presides over his own sound-effects company and is STARLOG's Special Project Director.

Visual:
Jim Thompson, whose surrealistic painting "Reflections in Pisces" graces the front side of this recording, combines professional artistry with a love for the fantastic, and has had his work featured in both FUTURE LIFE and STARLOG. A philosopher at heart, Jim numbers, among his many interests, photography, astronomy and science-fiction - and his paintings perfectly illustrate an intelligent approach to the depiction of far-away worlds.