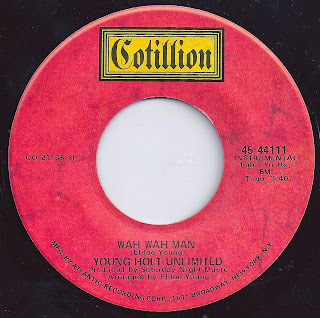 Funky & fuzzy wah wah and talk box jam from 1971. Right up my alley. Not rare or anything just a great tune i dig a bunch... I'm sure a million people have heard it but if you haven't dig in, it's groovy baby. I'm not extremely well versed in Young Holt Unlimited's catalog so if anyone has more recommendations along these lines feel free to let me know what to search out. They have a pretty vast catalog.... I've said this before and i'll say this again, i do NOT claim to be an expert on music ( i know a few things... ) and i do this blog for fun and for me to search out info on records i come across and have collected. I'm not trying to post rare or unheard gems because I'm a bottom feeder when it comes to collecting really... And almost everything is out there already. I just like music and collecting records is fun and helps keep me out of trouble.... I do appreciate the few people that swing by every so often and leave comments. Please do so more often!

That being said, here's the wiki lowdown on Young Holt Unlimited:

Young-Holt Unlimited (also known as Young-Holt Trio), were an U.S. soul and jazz instrumental musical ensemble from Chicago, Illinois.
Drummer Isaac "Red" Holt and bassist Eldee Young, formerly members of Ramsey Lewis' jazz trio, formed a new outfit called the Young-Holt Trio with pianist Don Walker in 1966. They met with modest success, including the minor hit with "Wack-Wack", which charted at number 40 on the Billboard Hot 100.
In 1968, the group renamed itself Young-Holt Unlimited, and replaced Walker with Ken Chaney. Under their new name, the group scored a number three Hot 100 hit with "Soulful Strut," the backing instrumental track from Barbara Acklin's "Am I the Same Girl." "Soulful Strut" sold a million copies with the gold record awarded by the RIAA in January 1969, less than 3 months after the track's release.[1] Unfortunately, follow-up releases failed to match "Soulful Strut"'s commercial success, and the group had disbanded by 1974, with Young and Holt continuing to play in Chicago small bands.
Young died of a heart attack on February 12, 2007 in Bangkok, Thailand, at the age of 71.

Labels: 1971, Are You Serious, Bugger Off, Coffee, Cotillion, Funky, Funky Guitar, Fuzz, Fuzzy, Guitar, Is This Shit Worth It, Matters, OMG, Shit, Tennis Elbow, Wah Wah, Wet And Moldy Cardboard, What Did You Say, Whatever