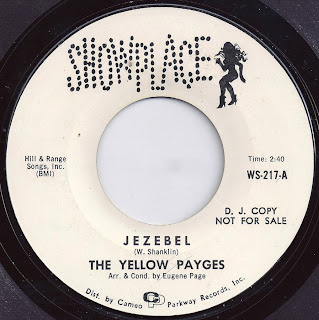 I don't know why this band doesn't get more love....? i don't own all the singles but i have a few and the full length lp and everything is really solid. Oh well.... Here is a great organ based garage rocker w/ cool guitar work from 1967 on the Showplace records label. File under; "Almost".....

The Yellow Payges were an American rock band, led by singer Dan Hortter, who were formed in Los Angeles, California in 1966. Although their commercial success was limited, they toured widely and recorded ten singles and an LP before splitting up in 1970.

The band was formed by singer Dan Hortter in Los Angeles in April 1966. Hortter had been a member of a Torrance-based surf rock band, the Driftones, who had just split up. At a performance by his friends in another band, the Palace Guard (whose drummer was Emitt Rhodes), at the Hullabaloo club in Hollywood, he joined the group onstage to play harmonica and sing "I'm a Man". His performance so impressed club owner Gary Bookasta that he invited Hortter to bring his own band to support The Newbeats two weeks later. Hortter recruited guitarists John Knox and Larry Tyre, bassist Herby Ratzloff, and drummer Terry Rae (formerly of the Driftones) to play the gig. Rae was then replaced by Dan Gorman, and the group changed its name to become The Yellow Payges.

They began playing regularly at the Hullabaloo, and Bookasta became their manager. There were further personnel changes. Knox and Tyre left and were replaced by Bob Norsoph and Randy Carlisle; and Mike Rummans replaced Ratzloff. When Norsoph and Carlisle themselves left, Rummans moved to guitar and Jim Lanham came in on bass; he was soon replaced in turn by Teddy Rooney, the son of actor Mickey Rooney. In 1967, the group released their debut single, "Never See the Good in Me" on the Showplace label, a subsidiary of Cameo-Parkway Records. Its local success, together with that of follow-up "Jezebel", resulted in the band signing with Uni Records. They released the single "Our Time Is Running Out", and the group toured the US as part of Dick Clark's Happening '67 package tour of 45 cities in 45 days.

Rummans and Rooney left the band in mid-1968, and were replaced by Bill Ham and Bob Barnes, both from Fort Worth, Texas. Rummans formed a new group, Salt and Pepper, with Rick James, Greg Reeves, and others. The Yellow Payges - now comprising Hortter (lead vocals, harmonica), Ham (lead guitar), Barnes (bass) and Gorman (drums) - continued to release singles, and played the Hollywood Bowl as support to Eric Burdon and the Animals, the Rascals and Tommy James and the Shondells. They also toured for several months as support for The Animals before undertaking a similar role opening for The Beach Boys. Other bands with whom the group shared a stage included Buffalo Springfield, the Doors, Pink Floyd, the Byrds, the Grateful Dead, and Jefferson Airplane. The Yellow Payges recorded the LP Vol. 1, released by UNI in mid-1969, and issued several singles including one of their best remembered songs, "Vanilla on My Mind", and a remake of "I'm a Man" which narrowly failed to reach the Billboard Hot 100. They also appeared on numerous regional television shows across the US, and on American Bandstand. Donnie Dacus briefly replaced Ham on lead guitar in 1969.

T he group were then hired to appear in a series of commercials for AT&T's Yellow Pages, which, according to writer Jason Ankeny at Allmusic, "effectively destroy[ed] their credibility and their momentum". According to Hortter, "We were put in these hideous yellow satin ruffled shirts with black velvet pants, and did these ridiculous commercials. It pretty much destroyed everything we worked so hard to accomplish." The group broke up in late 1970, during the recording of their second LP.

Yellow Payges - Jezebel
Posted by Devil Dick at 8:31 AM