The Sharps - Have Love Will Travel - Look At Me! 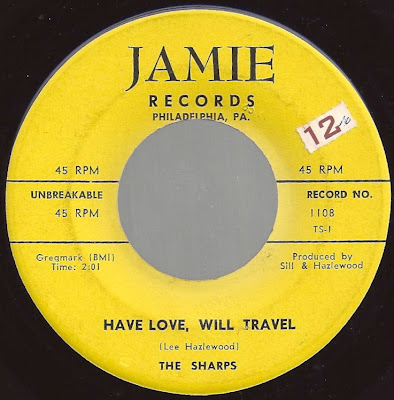 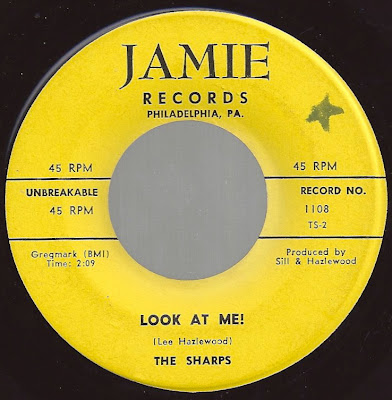 HAVE LOVE, WILL TRAVEL - LOOK AT ME! - THE SHARPS
Written by Lee Hazlewood
Produced by Lester Sill and Lee Hazlewood (1958)
Jamie Records - Philadelphia PA

A take-off on the TV Western show starring Palladin called Have Gun Will Travel. The guitar is unmistakingly Duane Eddy.
Among the vital and distinctive elements that made such Duane Eddy classics as
`Rebel-'Rouser' so memorable were the "rebel yells" overdubbed in Hollywood by
the Sharps, one of the most enduring R&B vocal groups of their time. Managed by
Hazlewood's partner Lester Sill and formerly known as the Lamplighters, the
group consisted of lead vocalist Carl White, Al Frazier, Sonny Harris and Rocky
Wilson. They first met Duane in 1958 when he was promoting `Moovin' N' Groovin''
and they were working off their recent Top 10 hit `Little Bitty Pretty One'. The
guys took the shy young guitarist under their wing, introducing him to the LA
musicians that would comprise his early road group. A month after
`Rebel-'Rouser' was taped, Eddy repaid the favor by contributing his
distinctive twang to the Sharps' `Have Love, Will Travel'. In 1962 Carl White
and his cohorts changed their name to the Rivingtons, introducing the world to
`Papa-Oom-Mow-Mow' and other crazed delights.

The Sharps - Have Love Will Travel