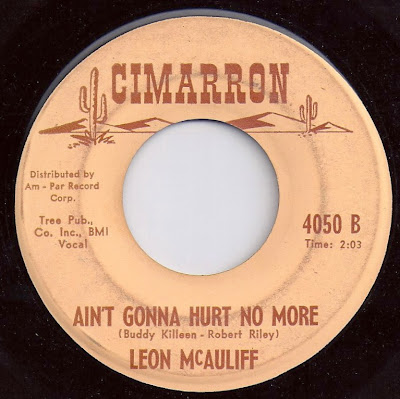 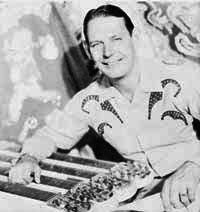 A little country rocker w/ some rockabilly tinges from 1961 on the Cimarron label out of Oaklahoma from Mr. Leon McAuliff.

Leon was a native of Houston, Texas. How could anyone forget Bob Wills when he'd call out on his recordings, "take it away, Leon...". A reknowned steel guitarist bar none. Take a listen to "Steel Guitar Rag". He was part of the Bob Wills sound for many years. Later on, he formed his own band. And was at one time recording on Cimarron records. He just about adopted Tulsa, Oklahoma as a home town from his many years there both with Bob Wills and his own band. Let's read about this famed steel guitarist and band leader.

He was held in such high regard by the folks in Tulsa, that the Tulsa Chamber of Commerce held a program dedicated to Leon, in the spring of 1952 or 1953.

Leon started his career off playing with W. Lee O'Daniels' Lightcrust Doughboys. Then he moved on to play with legendary Bob Wills and his Texas Playboys. Bob Wills had a habit of saying "Take it away, Leon..." as part of the recordings and performances and it became one of those things that became part of hillbilly lore. He did about 50 recordings with Bob Wills and the Texas Playboys while he was with them.

Then, in 1945, Leon organized his own band. Around mid-1953, it looks like their most recent release was "Sugar and Salt" that featured a vocal by Jimmy Hall. The flip side was a tune called "Panhandle Waltz", a steel guitar number featuring a solo by Leon.

Leon and his band also played for the dancers every Wednesday and Saturday evenings at the Cimmaron Ball Room in Tulsa as well as other personal appearances in the area.

Leon was married and had two kids, a daughter and son.


Leon McAuliff- I Aint Gonna Hurt No More
Posted by Devil Dick at 8:52 AM

I was hoping for something a little rootsier but thanks. I used to listen to to a country DJ from San Jose who claimed to have been a former member of Milton Brown's Musical Brownies. He played a fair amount of this kind of stuff mixed in with the country hits of the day. That was in the mid '70's when country radio was still listenable.

what happened to your bloh Jon????

glad ur still around..... even if its just leaving comments! thanks!