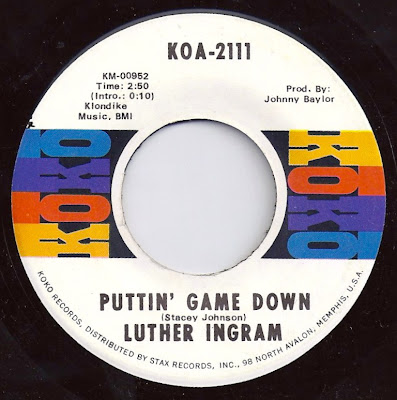 Pickens have been slim lately. I bought 2 records this weekend for $1.00.

This is one of them.

As for Mr. Ingram:

Born Luther Thomas Ingram in Jackson, Tennessee, his early interest in music led to him making his first record in 1965 at the age of 28. His first three recordings failed to chart but that changed when he signed for KoKo Records in the late 1960s, and his first hit "My Honey And Me" peaked at #55 on the Hot 100 on 14 February 1970. Many of his songs appeared in the pop and R&B charts, even though Koko was only a small label, owned by his manager and record producer, Johnny Baylor. Koko and Baylor were closely associated with the Memphis based Stax Records label during the height of its commercial success.
Ingram is best known for the hit, "(If Loving You Is Wrong) I Don't Want to Be Right", written by Homer Banks, Carl Hampton and Raymond Jackson. The song reached number one on Billboard 's R&B chart and peaked at number three on that publication's Hot 100 chart in the summer of 1972. The track stayed in the Hot 100 for 18 weeks, ultimately selling a reported four million copies.[1] The song was later successfully covered by Millie Jackson and Barbara Mandrell; it has also been recorded by Bobby "Blue" Bland, Rod Stewart and Isaac Hayes.
Other popular tracks for Ingram included "Ain't That Loving You (For More Reasons Than One)", "Let's Steal Away To The Hideaway" and "I'll Be Your Shelter." He also co-authored "Respect Yourself", a million seller for the Staples Singers in 1971. The acetate demo version of Ingram's, "Exus Trek", became a sought after Northern soul track. With the Stax connections, Ingram recorded at the Memphis label's studios, as well as other southern-based studios such as Muscle Shoals. He was opening act for Isaac Hayes for some years, and often used Hayes' Movement band and female backing group for his 1970s recordings. He recorded into the 1980s, and whilst only managing lower R&B chart hits, he remained a popular stage draw.
Ingram died on March 19, 2007, at a Belleville, Illinois, hospital of heart failure. According to his wife Jacqui Ingram, he had suffered for years from diabetes, kidney disease and partial blindness.

Luther Ingram - Puttin' Game Down
Posted by Devil Dick at 10:50 AM