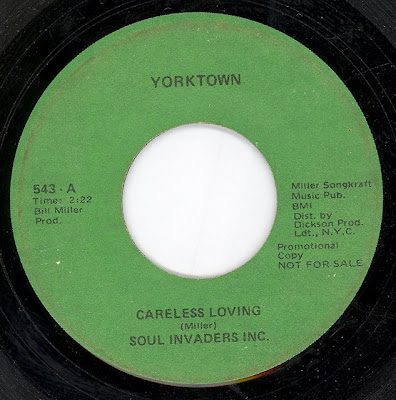 Soul Invaders Inc. This is the one that DIDN'T get away!!!!

Here is another one that i wrote about long before i could even post music here at the devil's music. See i had a run in with a certian record seller at one of the flea markets near my house with this record and it got away from me at that time: You can read about it Here: if you so desire, where after telling my tale of woe of not getting the 45 at that time i was lucky enough to have the sax player from the band, one Mr. Carl Williams leave some comments and tell a tale of playing out live and right in the middle of a sax break his sax actually broke!

Well it seems now Mr. Williams is a pretty big wig in the military! Pretty cool stuff. I mean i'm just a little old record collecting geek who posts some long lost 45's and I've had comments left by a bunch of guys that recorded some of these cool tunes. If you read any of the comments along the way you can see which band members left some.

ah, the wonder's of google searches!

Is it possible that this band was from Chicago? I remember watching a show called Red, Hot, and Blues on UHF TV back in the late 60s early 70s. There was a band on it regularly called Little Lonny and the Soul Invaders. This was some of the most poorly produced TV ever, but we watched it every weekend just for laughs.

What a great find..Good to read the comment from Carl Williams..He was teaching me to play the tenor sax years ago..The lead vocalist is my older brother, Micheal Simmons.What memories..I have photos of the group in my Facebook photos..Thanks 4 sharing this.

awesome pressured1 i'm heading over now to check out the pics!