Gus Jenkins And Orchestra - Slow Down 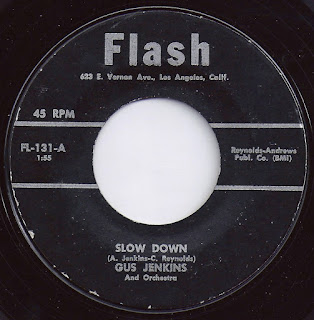 b. 24 March 1931, Birmingham, Alabama, USA, d. December 1985, Los Angeles, USA. Like many of his generation, Jenkins drew his influences from 40s blues and spent much of his mature career adapting to the demands of rock ‘n’ roll and R&B. As his earliest recordings for Chess and Specialty show, Jenkins, like Jimmy McCracklin, modelled himself on St. Louis pianist Walter Davis. Both largely unissued sessions took place in 1953 and featured ‘Cold Love’ and ‘Mean And Evil’, which along with ‘Eight Ball’ and ‘I Ate The Wrong Part’, were based on Davis originals. Thereafter, Jenkins recorded extensively for Combo and Flash, before he started his own Pioneer label in 1959. Most of these recordings were piano or organ instrumentals with his or Mamie Perry’s vocals. He continued this policy through the early 60s with a series of singles on General Artists. Late in the decade, he converted to Islam and assumed the name Jaarone Pharoah.
http://www.allmusic.com/artist/gus-jenkins-mn0001688015

Gus Jenkins And Orchestra - Slow Down
Posted by Devil Dick at 8:33 AM

Whoa! This really rocks. Pumpin' horns. Burnin' guitar. Pre-dates Larry Williams' "Slow Down". Shows the title phrase was already floating around out there. Square name for a hot band!

Great stuff Dick, thanks! You're a on a good roll, man!