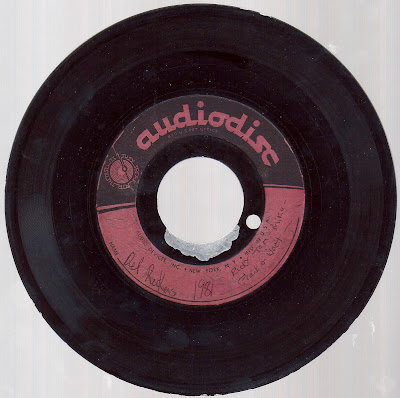 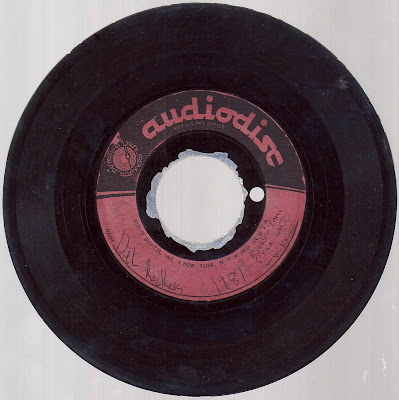 Ok, so i bought this acetate for 25 cents and I'm a bit puzzled (not hard to do). There are 2 different sets of writing on this thing. The pencil underneath i can not make out, but on top of the pencil in pen it says Del Rockers, 1981, Ricky - Tom - Frank - Walt + Mike on both sides. Is this really from 1981? I have several other Audiodisc acetates and they look just like this one but are from the early to late 50's. Were they still making these audiodisc acetates in 1981? and the acapella doo wop sounds on this sound hauntingly authentic. Did the Del Rockers nail it in 1981? Or did some band called the Del Rockers mock up this acetate as a goof or trick? I don't know.... Both tunes are pretty good for accapella, which I'm not really a big fan of. I don't really know the names of the songs but i took a stab considering they say the same thing a bunch of times in each song. If any of this rings a bell drop a note and let me know. Thanks.

I'm betting some guys found this, like you did, and tried to erase what was written on the label to take credit for themselves. I mucked about with the pics and could make out the name John on the "It's Really Love" side, but not much else.

I Googled a bit and the other title is "My Memories of You," and it looks like The Harptones are best known for it. There are a buncha clips on YouTube.

yeah i'm thinking someone messed with the labels.... thanks LB i appreciate the effort!
dd