The Legends - Bop-A-Lena - I Wish I Knew 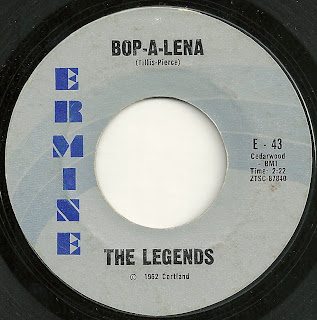 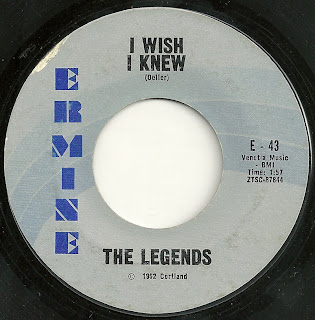 I bought this record on one fact and one fact alone. For the cover version of Ronnie Self's Bop-A-Lena. Another record i have already talked about HERE: on the Devil's Music. Not knowing anything about this group i had to check out the cover of one of my all time amped up 50's songs. And while this doesn't even come close to the original it is a pretty cool Buddy Holly type version. And the flip is a cool piece of Buddy Holly worship too. I've read that this is from either 62' or 63'.

Here is what i dug up on this cool band:

As any aging greaser can tell you, In the pre-Beatles '60's, rock 'n' roll in Milwaukee was spelled "L-E-G-E-N-D-S". The Legends, with front man McCue, were the first band to truly rock Beertown. Their singles "Say Mama", "Bop-A-Lena" and "Lariat" went to the top of the charts in Milwaukee. They were the first local rock band to nail a national record contract, getting signed by Capitol. Every weekend they held court over the spacious dance floor at Muskego Beach. And they helped inspire a generation of local musicians to make music their living. By any reasonable standard, Sam McCue is the godfather of Milwaukee rock. The son of a "semi-pro" trumpet-playing dad and a singing, fiddling mom, McCue started out with ukulele at age 6 and graduated to guitar.
In 1964, McCue left to take an opportunity as lead guitarist and band leader for the Everly Brothers. The Everlys turned out to be a memorable experience. McCue traveled all over the world, worked on a national musical variety TV series, and met and played with such rock royalty as Carl Perkins, Bo Diddley, Chuck Berry, Johnny Cash, Frankie Avalon and Bobby Vinton.

BTW WAMI stands for the "Wisconsin Area Music Industry" as these guys were from Milwaukee.

Great record!
Here is a link for the Legends sole long player in case anybody is interested.

great! thanks for that!!!

Thanks so much for sharing all these treasures with us! I know the time it takes to maintain a blog. Very grateful. (And sorry about your mom's house and everything involved there).

FYI -- as an old Legends/Sam McCue fan, it's my understanding that "If I Knew" was never a Buddy Holley song, but rather a song that was by a local Milwaukee guy who wrote it for Holley, who died before it could be recorded. The Legends did it, I guess, as a tribute to Holley and may be the only band who ever recorded it. I stand corrected if someone else has better information.

Let loose was not the groups only LP.

Hope you've also got a copy of Sam's "Legends Favorites" CD -- remake of many of the Legends earlier single and album cuts. Songs are even better than the originals because of improved recording quality.

Where can I find a copy of Legends Favorites?

Does anyone know if there is any value to a Legends Let Loose album where the record and jacket are great shape?