Lectric Woods - Time Of The Season 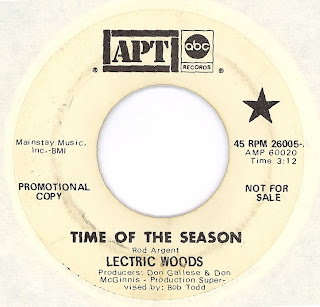 Strange & obscure instrumental cover of this well known Zombies tune on APT from 1969. Anyone who follows this blog will know i really dig odd cover songs. Apt Records was an ABC-Paramount subsidiary label launched in 1958. In the first 8 years of their 12 year run, they released nearly 100 singles. After a 3 year hiatus, the label was revived by (the newly named) ABC Records, who used the imprint to release 14 singles and one known LP before closing the label 1970. AS FOR LECTRIC WOODS....??? YOUR GUESS IS AS GOOD AS MINE....???

Lectric Woods - Time Of The Season
Posted by Devil Dick at 7:07 AM

is this link correct?

yes. i had to re-load it because divshare dropped the link the 1st time. It should work now!
enjoy!

Smooth...
Here's a polka version of Henry the VIII that i just discovered yeaterday: