Billy Thorpe and the Aztecs - That I Love 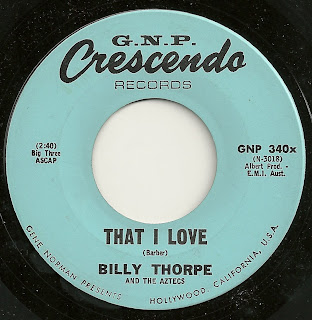 Another one from 1964 today from Billy Thorpe and the Aztecs. 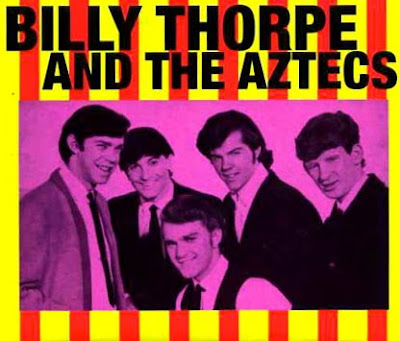 Billy Thorpe and the Aztecs were an Australian pop and rock group dating from the mid-sixties. The group enjoyed huge success in the mid-1960s, but split in 1967. They re-emerged in the early seventies to become one of the most popular Australian hard-rock bands of the period. Thorpe died from a heart attack in Sydney on 28 February 2007.

Originally a four-piece instrumental group who had put out one surfing instrumental, "Smoke & Stack", they formed in Sydney in 1963. With the advent of the Merseybeat sound, they added a lead singer, Billy Thorpe. His powerful voice and showmanship (which made him one of the most popular and respected rock performers in Australian music), completed the original line-up, which consisted of drummer Col Baigent, bassist John "Bluey" Watson and guitarists Valentine Jones and Vince Maloney (who later played with The Bee Gees).Valentine Jones left the band shortly after Billy Thorpe had joined and was later replaced by Tony Barber.

The flip is a horrible rendition of over the rainbow.... but this is pretty keen with its garage pop shit vibe....

Billy Thorpe and the Aztecs - That I Love
Posted by Devil Dick at 8:22 AM

Over The Rainbow was the A side and a big hit in Oz. This is the first time I've heard the flip - a lost gem.