Robert & Johnny - We Belong Together - Walking In The Rain 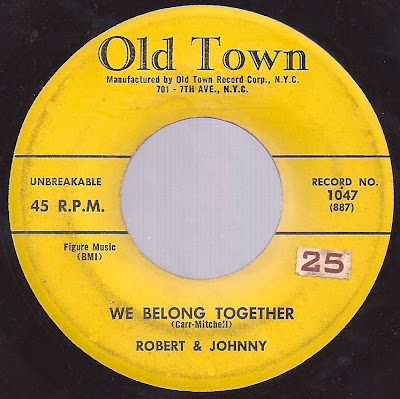 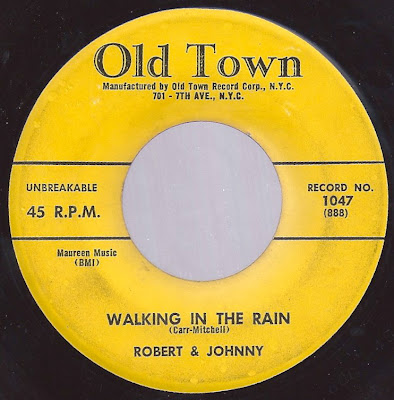 Robert & Johnny were an American doo-wop duo from The Bronx.

The duo's full names were Robert Carr and Johnny Mitchell; they released about a dozen singles for Old Town Records in the late 1950s and early 1960s. Two of them charted; "We Belong Together", which hit #12 on the U.S. Black Singles chart and #32 on the Billboard Hot 100 in 1958, and "I Believe In You", which hit #93 on the Hot 100 later that year. They wrote most of their own songs, and were distinguished by their vocal style, which Richie Unterberger has described as "one smoky, one nasal".

"We Belong Together" was a 1958 American rhythm and blues hit by Robert & Johnny. It was written by Johnny Mitchell, Robert Carr, and Sam Weiss. It reached #12 on the R&B charts and #32 on the Billboard Hot 100 chart.

The song was later recorded by several others. The Fleetwoods released a version on their 1959 album, Mr. Blue.
A rendition by Ritchie Valens was released in 1959 on the Del-Fi record label and can be found on several of his albums. It's also featured in a scene from the 1987 hit film about Valens, La Bamba.
The Belmonts released a remake on the Laurie label, Laurie 3080, in 1961, after they had split with Dion. It was not a hit, but was later reissued on a collector's label because of its musical value.
In 1961, Jimmy Velvit recorded it in the Dallas, Texas area. (see "Rockin' With Velvit" CD Seduction Records SCD-102, 2000) It attracted a lot of attention and air-play and became the #1 song on the Dallas radio station, KLIF, for a period of six weeks.
A different singer using the name Jimmy Velvet had a #75 hit with the song on the Billboard Hot 100 in 1964.
Peaches & Herb included the song on their album, Let's Fall In Love.

Robert & Johnny - We Belong Together

Robert & Johnny - Walking In The Rain
Posted by Devil Dick at 12:03 AM